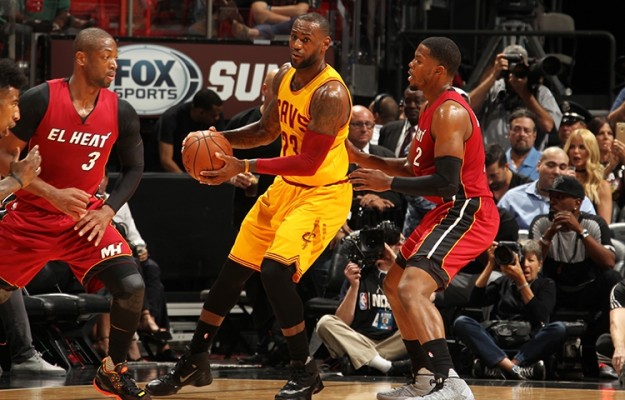 (Miami, FL) – Being on the receiving end of a pair of lethal first-half runs proved to be deadly for the Cleveland Cavaliers as they were battered by the Miami Heat, 122-101, at American Airlines Arena on Saturday night.

Playing the back end of a back-to-back, the Cavaliers started out flat and were never able to get much going on the offensive end. The loss continued a worrisome streak of 11 straight losses on the road against the Heat, including the last four with LeBron James back in a Cavs uniform. The concern stems from the fact that Cleveland and Miami may meet in the postseason, which begins next month.

“When we’re physical at the start of the game on offense and defense, we do well, but we didn’t do that tonight,” Lue said.

James led all scorers with 26 points, adding three rebounds and three assists, while Richard Jefferson added 20 points and four rebounds. Only two other Cavs reached double figures in points, with Kyrie Irving finishing with 14 and Matthew Dellavedova ending the night with 10.

James spoke about how the loss wasn’t a good omen for a potential season matchup:

“The way they’ve beat us here is a little concerning,” James said.

In the first quarter, the Heat hit on 62 percent of their field-goal attempts, showed strong ball movement with eight assists and controlled the boards with a 13-5 edge. A seven-minute stretch that overlapped the first two quarters saw Miami go on a 20-8 run that gave them a 40-25 lead with 9:13 left in the half.

The Cavaliers appeared to answer by scoring 11 unanswered points, but the Heat countered with 13 straight points of their own to make it 53-36 with 4:08 left in the second period. The key blows for Miami were a trio of three-pointers in just a 57-second span. In the final two minutes of the half, the Heat twice boosted the lead to 21 points before heading to intermission with a 65-44 lead.

“The pace, we couldn’t keep up with it tonight,” James said.

The second half would prove to be no better for Cleveland, as they never got any closer, with garbage time effectively kicking in during the third quarter. Miami eventually took its biggest lead of the game at 33 with 8:51 left to make it 107-74.

While not attempting to make excuses, Lue pointed out that fatigue might have been an issue:

“It’s our fifth game in seven days,” Lue said. “It just seemed like they were moving way faster.”

In an odd bit of timing, the Cavaliers clinched the Central Division title despite the loss.

The Cavaliers return to action on Monday night when they host the Denver Nuggets in a game that will tip off just after 7 p.m. ET. Back on December 29, the two teams met in the Mile-High City with the Cavs winning 93-87.