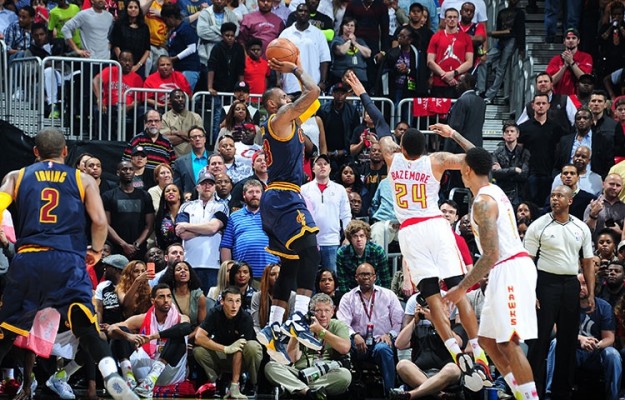 (Atlanta, GA) – In a game that went down to the final buzzer in overtime, the Cleveland Cavaliers survived a disastrous third quarter to emerge with a 110-108 victory over the Atlanta Hawks at Philips Arena on Friday night.

Kyrie Irving split a pair of free throws with 6.9 seconds left in the extra session, with the Hawks then being in position to either tie or win the game. The Hawks’ Al Horford went for the win, but missed his three-point attempt to improve Cleveland’s season record to 54-22 and keep them 2.5 games ahead of the Toronto Raptors for the best record in the Eastern Conference. The missed free throw by Irving marked the first time in his NBA career that he’d missed an overtime free throw.

LeBron James narrowly missed another triple-double with a team-high 29 points, 16 rebounds and nine assists. Irving was one of four other Cavs players to reach double figures, ending the night with 20 points, seven assists and six rebounds. Kevin Love contributed 15 points and six rebounds, J.R. Smith added 12 points and Iman Shumpert rounded out the quintet with 11 points. In addition, Tristan Thompson finished the evening with nine points and 14 rebounds.

“We need these type of games for a young ball club. We’ve been together almost two years now,” James said after the game. “Any time we get an opportunity to experience a one-possession game or some adversity, and we’re able to come through, it’s a big thing moment for our team.

James reached another milestone during the contest by moving into 11th place on the NBA’s all-time scoring list, passing the legendary Oscar Robertson.

The entire game was a stomach-churning roller coaster ride that saw each team put together a pair of key runs during the course of the game. The Cavaliers were seemingly in control with a 21-point first-half lead, but soon found themselves trailing by three. That changed back into an 11-point Cavs advantage before a four-point deficit required some late heroics just to send it to overtime. In the extra period, Irving needed to make five free throws in the final 20 seconds to give his team the opportunity for the win.

“You obviously like to run away with it. We built up a big lead in that second quarter and then they came out with a lot of aggression,” Love explained after the game. “When you make it a two-minute game, whether it’s in the fourth quarter or overtime, you can always grow from those situations during the season.”

Over a 10-minute span in the third quarter, the Cavs watched a 21-point advantage disintegrate into a three-point deficit. The chief culprit was ice-cold shooting that saw them make just 3-of-19 (16 percent) from the field during this frigid stretch. They were finally able to get back on track after trailing 64-61 with four minutes left. For the remainder of the period, they outscored Atlanta 16-7 and took a 77-71 advantage heading into the final quarter.

“In the third quarter, we didn’t trust our offense, we started playing one-on-one basketball and we weren’t making our shots,” said Cavaliers head coach Tyronn Lue.

“This game showed some growth and resilience in our team because we were up by a lot, the game got close and they challenged us,” Thompson said. “They told us, ‘If you want a ball game, here it is,’ and we fought through and got the win in overtime.”

The Cavaliers return home for a Sunday afternoon clash against the Charlotte Hornets that will tip off just after 3:30 p.m. ET.