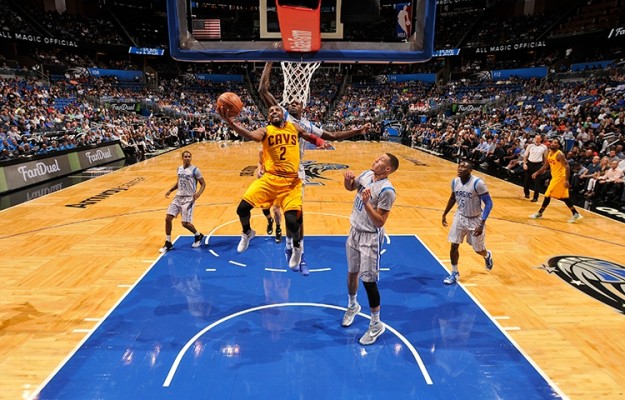 (Orlando, FL) – A key 13-2 run midway through the fourth quarter helped the Cleveland Cavaliers emerge with a hard-fought 109-103 victory over the Orlando Magic at the Amway Center on Friday night.

The win officially clinched a playoff berth for Cleveland with 14 games to play, though the Cavs remain focused on capturing the best record in the Eastern Conference.

Plagued by 19 turnovers throughout the contest, the Cavaliers trailed the Magic 92-90 with 9:16 remaining. Over the next five minutes, however, Cleveland used a 13-2 run to take a 103-94 lead, with Kyrie Irving notching the first six points and Channing Frye capping it with a three at the 4:05 mark. Orlando got within four points with 1:03 left, but the Cavs held on to improve their record to 49-19.

Perhaps even more important than Irving’s jump-start in the fourth was Tristan Thompson, who notched nine points and grabbed 10 rebounds during a clutch quarter-long effort. Those efforts were needed to blunt the 45-point effort from the Magic’s Victor Oladipo.

“A total team effort. In the first half, they were playing way more physical than us,” Thompson said after the game. “We have to come out ready to play and can’t take any team lightly.”

Oladipo was held to just six points in the fourth quarter, something Cavs head coach Tyronn Lue attributed to the presence of Matthew Dellavedova.

“I thought Delly being physical with him was a big part of it,” Lue said.

Irving led the Cavaliers with 26 points and added five assists, one of five Cleveland players to score in double figures. LeBron James returned after resting in Wednesday’s contest to score 18 to go along with eight assists and seven rebounds.

Despite the onslaught by Oladipo, James wasn’t upset by the team’s defense on the night:

“We kept everything at bay and everything we wanted to happen, happened,” James said.

Frye and Kevin Love each chipped in with 14 points, while Thompson picked up a double-double with 11 points and 15 rebounds.

Love and J.R. Smith didn’t play during the fourth quarter, but Lue said there were no particular issues involved:

“That’s just the way the flow of the game went,” Lue said.

The Cavaliers have little time to bask in the victory with a challenging matchup facing them in Miami on Saturday night. Since James returned in 2014, the Cavs have been winless in three road tries against the Heat. Tipoff will take place just after 7:30 p.m. ET.