Should LeBron James Still Be Supportive of Tristan Thompson After Camp Snub? 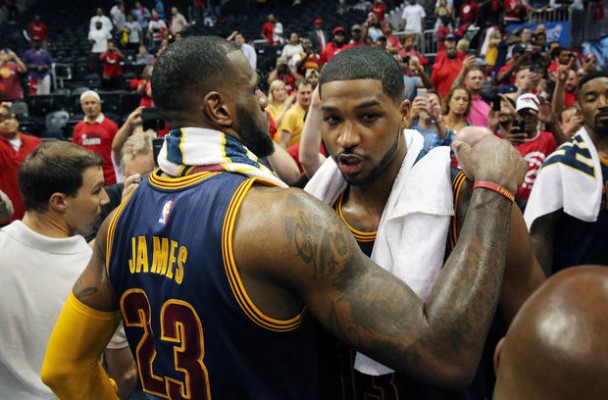 The back and forth drama that has marked the Cleveland Cavaliers’ offseason went in another direction over the past weekend during LeBron James’ call for teammates to join him in a pre-training camp workout in Miami.

Nine of James’ teammates accepted the invitation, including three players coming off major injuries: Kyrie Irving, Kevin Love and Anderson Varejao. However, the most noticeable absence was that of power forward Tristan Thompson, who remains embroiled in a contract dispute that puts him and his agent, Rich Paul, at odds with Cavaliers’ management.

Thompson will play for the Cavs regardless of what the final disposition of the stalemate is, since he remains a restricted free agent. However, if he chooses to sign a qualifying offer that makes him an unrestricted free agent next year, Paul has indicated that Thompson will leave the team, thereby depleting the Cavaliers’ roster in 2016-17 and beyond:

“A Tristan Thompson qualifying offer will be his last year with Cavs.”

The sticking point, as always, is money, with Paul and Thompson holding firm on getting a max deal that will pay Thompson $94 million over five years. Cleveland thought they had a deal at $80 million, which was already $10-15 million more than experts were figuring and $28 million more than the four-year deal that the duo turned down last October.

While Thompson’s offensive numbers don’t really justify a max deal, the fact that James’ agent is also Paul means that if James has sought to apply true pressure to the team to sign Thompson, he would’ve done it already. James hasn’t expressed any outward irritation either way over the lingering conflict, but showed strong support for Thompson during the team’s postseason run to the NBA Finals that Thompson should be a Cavalier for life, by saying:

“Tristan should probably be a Cavalier for his whole career. There’s no reason why he shouldn’t. This guy is 24 years old, he’s played in 340-plus straight games, and he’s gotten better every single season. It’s almost like ‘What more can you ask out of a guy?'”

James is committed to bringing a championship to Cleveland, and knows that Thompson is a key component of that effort. Since his return last year, James has excelled in the area of public relations, but the more this issue lingers, the more James gets put in an uncomfortable position, something he takes great pains to avoid.

It would be hard for James to credibly attack the Cavaliers for not giving in to Thompson and Paul’s demands, considering the team is already facing a monstrous luxury tax for this season.

While James knows that contract negotiations are a cat and mouse action, the shell game that Thompson and Paul continue to play when it comes to upping the final price is already turning Cavs fans against them. Some of those fans are suggesting that Thompson be dealt elsewhere to get something in return.

James undoubtedly doesn’t want to get any of that negative blowback, and he definitely can’t be happy that Thompson rebuffed his invitation to attend the Miami workout. After all, if the recovering trio of Irving, Love and Varejao could find time in their schedule to do so, Thompson really has no excuse.

Even if Thompson chose to sit out the actual workouts to protect his contract status, his support for his teammates would have bolstered the team’s already-strong chemistry.

Despite the support that James is currently giving Thompson, the snub and unwillingness to bend to get a deal done and prepare as a team are foreign to everything that James believes. That philosophy is something that doesn’t include the lone wolf approach that Thompson is taking, with two NBA titles proving that James’ approach works.

In last year’s early season games, James wasn’t afraid to call out Irving and Love, so the question becomes whether or not he’ll do the same with Thompson.

Undoubtedly, James isn’t looking to experience déjà vu with regard to Thompson, but that’s what looks to be on tap unless he’s able to get through to Thompson. A few more actions like last weekend could eat away at the bond between the two players and put what could be a championship season in severe jeopardy.