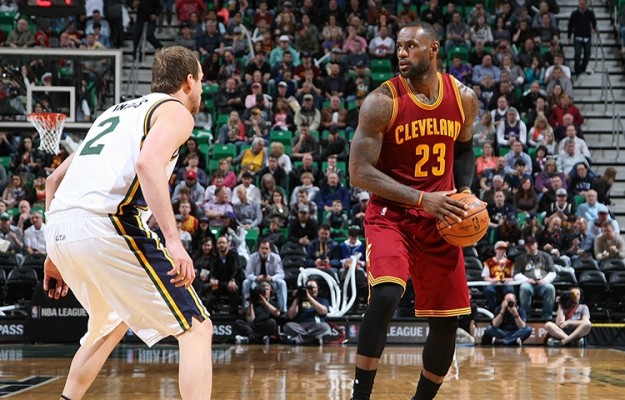 (Salt Lake City, UT) – A costly 20-4 run at the outset of the fourth quarter ended the Cleveland Cavaliers’ three-game winning streak as they dropped a 94-85 decision to the Utah Jazz at the Vivint Smart Home Arena on Monday night.

The Cavaliers had broken a 66-all deadlock on Matthew Dellavedova’s three-pointer 19 seconds into the quarter, but then hit just 2-of-13 over the next seven minutes as the Jazz raced to an 86-73 lead. Two Kyrie Irving baskets were all the Cavs had to show for during this long, cold stretch.

Cleveland was never able to get closer than seven points the rest of the way and saw its record drop to 47-19 on the year. The loss came despite Utah’s Gordon Hayward not dressing for the game due to a foot injury.

Unlike Sunday’s contest, the three-pointer didn’t pack much punch for the Cavaliers as they made just 10-of-42 shot attempts (24 percent) from long range on the night. The 85 points marked the lowest offensive output for the Cavs since head coach Tyronn Lue’s debut on January 23, when they lost to the Chicago Bulls, 96-83.

“We tried to get it going, but we just didn’t have it tonight,” Lue said after the game. “Going into it, I thought we lost our legs.”

“We had our chance, but I think we settled a little too much on the outside shot,” commented James on one of the possible reasons for the loss. “At a certain point, you have to realize it’s not going down and get in the paint a little more.”

Love commented about the difference between the team’s last two games:

“(A faster) pace could have helped us,” Love said. “It was definitely different than yesterday.”

Channing Frye was ejected with 3:57 left in the game when he took an elbow to the groin and retaliated against Trey Lyles of the Jazz. That followed an earlier technical he had been assessed, while Lyles’ Flagrant 1 foul got him tossed.

At the start of the game, Cleveland jumped out to an early 11-4 advantage, but a 15-4 run by Utah gave them the first of two four-point leads in the quarter. By the time the horn sounded, the Cavs trailed 28-26.

Struggles with their shot attempts then held the Cavaliers to just 36 percent shooting in the second period, though they only found themselves trailing 48-44 at the break.

Despite allowing the Jazz to score the first five points of the third quarter, the Cavs defense eventually emerged over the rest of the period to allow their opponent to hit just 35 percent of their shot attempts over those 12 minutes.

“I know we had some defensive breakdowns, but I have to look at the film to get a better idea,” said James afterward in the Cavs’ locker room.

The Cavs now return home after going 3-1 on their Western Conference road swing as they face off against the Dallas Mavericks on Wednesday night.

“It leaves a bad taste in your mouth, naturally, it’s bittersweet,” added Love. “We wanted to go 4-0, but 3-of-4 when we played two back-to-backs is pretty good.”