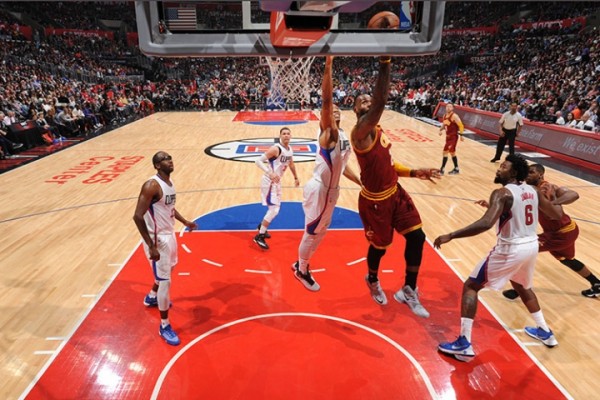 (Los Angeles, CA) – Exploding after a bumpy start, the Cleveland Cavaliers won their third consecutive game on their Western Conference road trip by tying a season-high 18 three-pointers in a 114-90 victory over the Los Angeles Clippers.

Strong shooting, crisp ball movement and keeping turnovers to a minimum served as keys to the victory, which improves the Cavaliers’ record to 47-18 on the year.

Cleveland showed some early rust after not having played since a Thursday night win against the Los Angeles Lakers in the same facility. The Clippers jumped out to a 14-4 advantage in the first five minutes as the ice-cold Cavs connected on just two of their first 11 field-goal attempts. However, the Cavaliers then outscored the Clippers in the final seven minutes of the period by a 17-5 margin, which provided them with a 21-19 lead at the end of one.

LeBron James led all scorers with 27 points, six rebounds and five assists, one of six Cleveland players to score in double figures. The starting backcourt of Kyrie Irving and J.R. Smith each hit for 17 points, with Irving also dishing out five assists.

James spoke immediately after the game about how the team quickly adapted to its slow start:

“We didn’t start the game off so well, it took us a little longer to get into the game,” James said. “We were able to close out the first quarter and after that we were able to keep our defensive intensity up and we moved the ball offensively and everyone was in a rhythm.”

Channing Frye returned to the bench, but was still deadly from long range by scoring all 15 of his points on five three-pointers. Kevin Love returned after sitting out Thursday’s game with a knee problem to score 12 points and haul down nine rebounds, while Tristan Thompson picked up another double-double with 10 points and 11 rebounds.

Any hopes the Clippers had of getting back into the game were ended when the Cavaliers connected on eight three-pointers during the third quarter, half of them coming from Smith. That allowed the Cavs to boost their lead up to 25 points on two occasions. The final quarter was then essentially garbage time, which offers some benefit to the Cavaliers since this contest is the front end of a back-to-back and the first in a grueling stretch of five games in seven days.

“LeBron was able to sit out the entire fourth quarter, so I’m leaning toward playing him.”

James was asked if the game was a good sign with one month left to play:

“We came out on this road knowing that this trip was the one we kind of needed to make a statement and see where we need to go,” James said. “We’ve started out the right way so far.”

The Cavaliers will seek to close out the four-game road trip with another win on Monday night when they travel to face the Utah Jazz. The game will tip off at the special time of just after 10:30 p.m. ET, since the game is being nationally televised by ESPN.