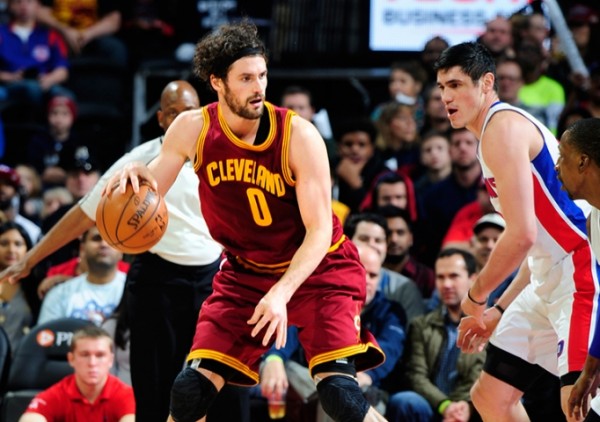 (Auburn Hills, MI) – After their blowout 115-93 victory over the Phoenix Suns on Wednesday, the Cleveland Cavaliers (33-12) won their third straight game with an impressive 114-106 victory over the Detroit Pistons (25-22) on Friday night at The Palace of Auburn Hills.

Power forward Kevin Love (15.7 points, 10.8 rebounds and 2.4 assists per game) and point guard Kyrie Irving (15.4 points, 3.8 assists and 3.2 rebounds per game), who were both snubbed of a spot on the Eastern Conference All-Star team in the eyes of many NBA fans, stepped up in a big way for the Cavs on Friday night. Love led all scorers with 29 points, six boards and three assists, while Irving went off for 28 points, four boards and two assists.

Outside of Love’s teammates being disappointed by his All-Star snub, Cavs head coach Tyronn Lue was also surprised by his power forward being left off the Eastern Conference roster.

“I just thought, in this league it’s always been about winning and winning has always been rewarded,” said Lue before the Cavs’ shootaround Friday morning. “Being number one in the East and Kevin being one of four guys in the NBA to average a double-double on a winning team, I’ve just never seen being a first-place team and getting one guy in. I’ve never seen that before.”

Irving, who continues to play at a higher tempo of basketball in Lue’s system, cited the team’s conditioning as a focal point going forward.

“After the games, we’re getting extra cardio in. We just have to pick up our pace and get in better shape,” said Irving after Cleveland’s win. “It’s not hard. We’re professionals. Being one of the leaders on the team, I have to respond well.”

The victory came on a night where superstar small forward LeBron James surpassed 26,000 career points, the 17th player to accomplish this feat and the youngest to ever do it at only 31-years old. The four-time NBA MVP had quite an impressive night, coming just short of a triple-double with 20 points (7-of-16 from the field), nine rebounds and a game-high eight assists.

James, who has taken a lot of criticism lately regarding the falling out between the Cavs and former head coach David Blatt, continues to tune out the noise and stay focused.

“I can’t worry about a select group of people that want to use their negative energy to take away my positive energy,” said James.

Cleveland also got solid production from their big men, as center Tristan Thompson (3-of-5 from the field and an impressive 5-of-5 from the charity stripe) had 11 points and a game-high 14 rebounds, while center Timofey Mozgov (5-of-6 from the floor and 2-of-2 from the free-throw line) came off the bench to score 12 points and nab eight boards.

The Pistons, who had all five starters and two reserves score in double figures, simply could not get any closer than an eight-point deficit in the second half.

All-Star center Andre Drummond, who was the first Pistons player to be selected to the NBA All-Star Game since guard Allen Iverson in 2009, led Detroit with 20 points, eight boards and three blocked shots. Pistons guard Kentavious Caldwell-Pope, who hit seven of his 15 shots from the field, finished the night with 19 points, seven rebounds and two assists.

Up next, the Cavs will head home for a huge matchup against the San Antonio Spurs (39-7) on Saturday night. The contest, which is scheduled to tip off shortly after 8:30 pm ET, will be broadcast live nationally on ABC.