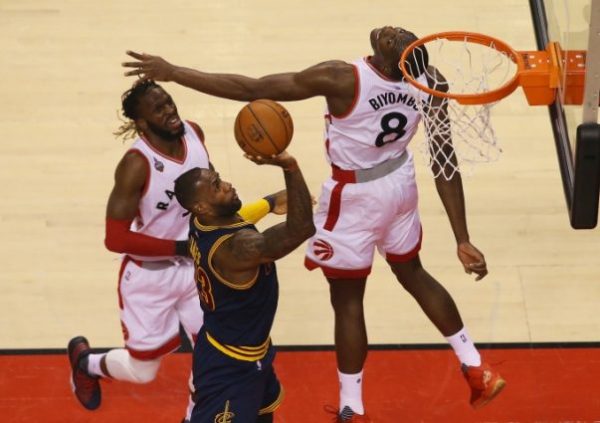 (Toronto, ON) – Despite a furious second-half comeback that saw the Cleveland Cavaliers make up an 18-point deficit, the rally came up short in a 105-99 loss to the Toronto Raptors in Game 4 of the Eastern Conference Finals at Air Canada Centre on Monday night.

“It wasn’t enough because we got off to a horrible start in the first half,” LeBron James said in postgame remarks. “We can’t dig ourselves a big hole like that.”

The defeat now deadlocks the series at two games apiece, with Game 5 set for Wednesday night at Quicken Loans Arena.

“We felt we had the opportunity to not play well and still win that game,” Cavaliers head coach Tyronn Lue noted after the game. “We came up short because they executed every time we made a mistake.”

In the opening minute of the second half, the Cavaliers trailed 59-41 and still faced a 15-point deficit at 71-56 with 3:59 left in the quarter. It was at that point that the ill-fated comeback commenced.

By the end of the period, they had reduced the margin to nine points at 78-69 and then scored the first eight points of the fourth quarter. The two teams then began trading baskets over the next six minutes to make it 96-all with 4:37 left.

“When we had that run, we played some pretty good defense,” James said.

The Cavs then went cold by missing nine of their last 10 shots. Meanwhile, Toronto was able to convert a number of second-chance opportunities to put the game away.

“We could have gotten tired, but we made some defensive mistakes down the stretch, which we can’t do,” Lue remarked.

Ironically, the comeback had been fueled by torrid three-point shooting that saw Cleveland connect on 9-of-11 shot attempts before missing 7-of-8 in the late fade. The irony was based on the fact that the Cavs had shot a miserable 14 percent (3-of-22) from long range in the first half.

“We have to be more definitive in our pin-down defense and our communication,”Kyrie Irving said afterwards.

James led the Cavaliers with 29 points, nine rebounds and six assists, while Irving finished with 26 points and six assists. The only other Cleveland players to score in double figures were Channing Frye with 12, all on three-pointers, and Kevin Love, with 10 points and seven rebounds.

“I thought Channing gave us a great lift off the bench tonight,” Lue said.

Cleveland only trailed 27-24 at the end of the first quarter, primarily thanks to a 10-2 run that began with just under six minutes left in the period. However, Toronto’s 59 percent shooting in the second quarter allowed them to progressively build up their advantage.

“Going back home, we have to play a lot better and I think we will,” James said.

Game 5’s tipoff is scheduled for just after 8:30 p.m. ET, with the game again to be broadcast nationally on ESPN.