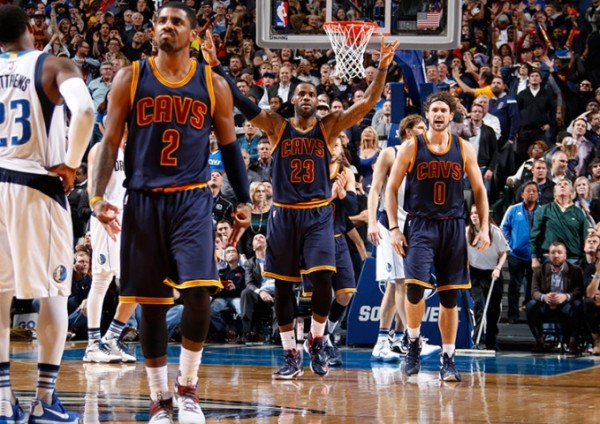 (Dallas, TX) – Kyrie Irving’s three-pointer with 13.8 seconds left in overtime clinched a dramatic comeback victory for the Cleveland Cavaliers as they boosted their winning streak to eight games with a 110-107 win over the Dallas Mavericks on Tuesday night at American Airlines Center.

Irving’s three had been preceded by a LeBron James layup with exactly a minute left in the extra session, and was followed by Iman Shumpert’s strip of Deron Williams. That resulted in James splitting a pair of free throws to cap what had been a roller-coaster affair. Over the final 2:17, the Cavs outscored the Mavericks 10-4 after Dirk Nowitzki’s three had made it 103-100 in favor of the Mavericks.

Afterwards, Irving spoke of the team’s ability to maintain its focus:

“It wasn’t the best shooting night for a lot of us, but we persevered.”

James talked in postgame comments about why he decided to pass the ball to Irving for the clinching three:

“Just reading the defense, I was able to throw it back to Ky, and it’s just the confidence I have in his shot,” said James.

The Cavaliers didn’t take their first lead of the game until Irving drilled a three with exactly 10 minutes left in the game. That led to nine consecutive lead changes in nearly four minutes of action and a total of 13 over the remainder of the game.

“I really like the way we executed down the stretch,” said Blatt. “We had to make plays to win this game and we did.”

The final minute of regulation also had plenty of drama, with James tying the game on a pair of free throws with 39.4 seconds to go, Dallas retaking the lead and James scoring on a dunk with 20.9 seconds remaining. Shumpert then stripped the Mavs’ Dirk Nowitzki of the ball, but the Cavs’ shot at the buzzer missed to send it to overtime tied at 95.

“We did switch and Iman just made a great play,” said Blatt. “He makes a lot of plays that don’t end up on the stat sheet.”

Shumpert explained his strategy against a player much taller:

“My teammates trust me in one-on-one against anyone in the league, and I took my chances,” said Shumpert. “I watch a lot of film. I’m a rhythm guy, I count dribbles, I look at a lot of things.”

Love’s take on the comeback mirrored Irving’s mention of perseverance:

“We just fought and erased a couple deficits and then made some shots.”

Blatt commented about the value of staying close:

“We didn’t lose our poise and it came against a very good team,” said Blatt. “We have to build off this.”

James spoke about how the team has been able to put together its winning streak:

The Cavs will stay in the Lone Star State for two more games, the first of which will be another highly-awaited clash when they travel to face the San Antonio Spurs in a nationally televised 8 p.m. contest on Thursday.