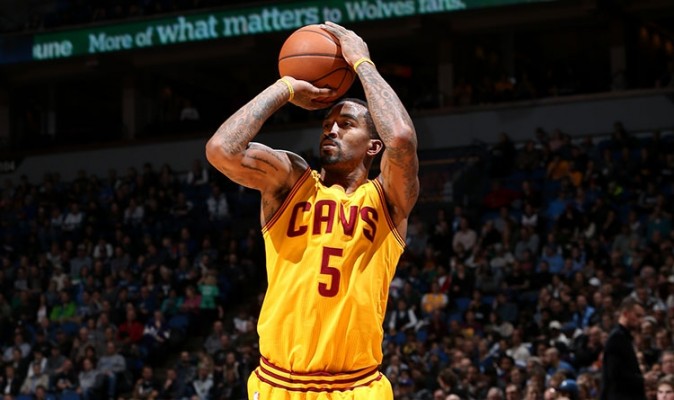 (Minneapolis, MN) – Putting up a season-high 125 points, the Cleveland Cavaliers continued their recent scoring surge with an easy 125-99 win over the Minnesota Timberwolves at Target Center on Friday night.

The point total marks the third consecutive game in which Cleveland has scored more than 120 points and improves their record to 25-9, while Minnesota drops to 12-25. For the game, the Cavs shot 53 percent from the field and maintained consistent ball movement throughout, finishing with 21 assists and hitting 13 three-pointers.

Taking control early and pouring it on late could be the brief synopsis of the Cavaliers’ sixth straight victory as they turned an early seven-point deficit into a seven-point lead in the opening quarter, then ended any remote comeback hopes with a 14-6 start in the fourth.

LeBron James scored only 13, but grabbed 12 boards and narrowly missed a triple-double as he handed out eight assists. Meanwhile, Kevin Love, who returned to far less fanfare than his visit last season, came close to his own double-double with 20 points and nine rebounds. Off the bench, Iman Shumpert tallied 23 points and contributed four steals to the team’s defensive effort.

James talked about how the Cavs have been able to light up the scoreboard of late, then spoke about missing out on a triple-double:

“Ball movement. We’ve been working diligently during practice on passing the ball,” said James. “I’ve probably left 20 or 25 on the table during my career.”

Cleveland head coach David Blatt discussed why Shumpert, usually known for his defense, was able to make a dent on the offensive side:

“I thought he played simple and straight,” said Blatt. “The ball was falling for him and he got some good looks.”

In addition, J.R. Smith was on fire during the 19 minutes he was on the court, connecting on 10-of-12 in the field goal department. He was especially prolific from beyond the three-point line, hitting on 5-of-6 attempts to finish with a team-high 27 on the night.

Smith was asked after the game about his big night and then joked about his four baskets in the paint,:

“I think the fact that Kyrie (Irving) is playing, it opens things up for J.R. to take advantage,” said Blatt.

The Cavaliers fell behind early at 13-6, but quickly took control with an 18-4 run that was part of the team’s 62 percent shooting from the field during the first quarter. While they cooled off considerably in the second period, their defense limited the Timberwolves to just 29 percent shooting from the field during those 12 minutes. The defensive effort helped double what had been an eight-point advantage at 35-27 after one quarter to 62-46 at the break.

Hitting seven of their first 11 shots after the break boosted the margin to 20, with Minnesota then getting as close as 13. However, by the time the third quarter ended, the Cleveland advantage had moved back up to 19 at 95-76. From there, they boosted the lead to as much as 29 as garbage time soon commenced.

Smith spoke about how the Cavaliers can still get even better down the road:

“We’re very close, once Kyrie gets his minutes restriction lifted and is able to play back-to-back, we’ll be fine,” said Smith.

Shumpert also talked about the team’s potential in the months ahead and his uncharacteristic big night on offense:

“I think the pieces are starting to come together, but we’re as good as we want to be,” said Shumpert. “I’m on a team where I really don’t have any scoring responsibilities, so sometimes I decide to come out more aggressive.”

Cleveland now heads back East for a Sunday evening game at Philadelphia that will tip off just after 6 p.m. ET. After that contest, the team will then play three games in Texas to close out their road trip, beginning with a Tuesday night clash against the Dallas Mavericks.