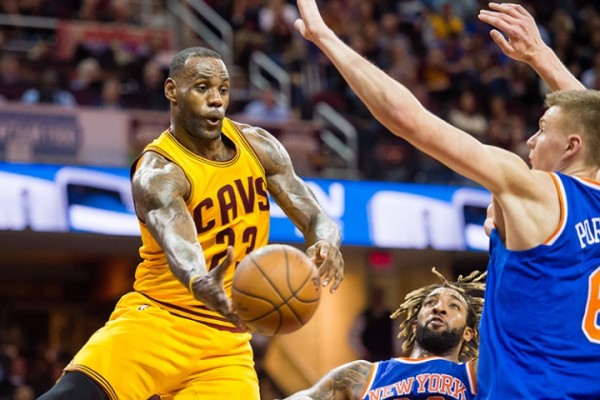 (Cleveland, OH) – Closing out the final five minutes of the game with outstanding defense, the Cleveland Cavaliers avoided a major upset as they emerged with a 91-84 victory over the New York Knicks on Wednesday night at Quicken Loans Arena.

At the five-minute mark, the Cavaliers trailed 80-79, then fell behind one more time nearly one minute later at 82-80. However, over those last five minutes, New York made just 2-of-10 field goal attempts and committed two key turnovers, allowing the Cavs to tally eight unanswered points during much of that stretch.

After the Knicks scored their final basket with 36.8 seconds remaining to make it 89-84, Tristan Thompson put the game away by connecting on a pair of free throws with exactly 10 seconds to go.

Cavaliers head coach David Blatt talked about the defense coming to the forefront in the clutch:

“We got some big stops and executed three or four sets,” said Blatt. “We made the right plays at the right time down the stretch.”

For that final quarter, New York was held to 25 percent shooting from the field, finishing at 39 percent on the evening. The key component through much of that effort was former Knick Iman Shumpert, who forced a key turnover and also forced the Knicks to call a timeout as a result of his defense.

Blatt was full of praise for Shumpert’s effort:

“He’s a guy that ignites our defense; it’s good to see him back,” said Blatt. “He’s an impactful defender. He deflects, he steals, he’s an aggressive defender.”

As good as the defense was for Cleveland, the offense struggled, shooting just under 39 percent on the evening. Blatt spoke after the game about how that hurt the team on the night:

James spoke about both ends of the court, starting with the defensive shutdown in the final minutes:

“We just got stops and we were able to make some key shots,” said James.

Then James talked about the offensive troubles:

“To get assists, you have to make shots, and we just didn’t make some timely shots.”

Love spoke immediately afterward about how tough it was to put New York away:

“They really get up for us,” said Love. “But we started executing our plays and got the job done.”

For the first time this year, the Cavs had their first full lineup when Mo Williams returned after missing the previous two contests with a right thumb injury. On the other hand, New York was missing a key piece as forward Carmelo Anthony sat the game out with a sprained right ankle.

After having two months of buildup, the long-awaited rematch between the Cavaliers and their opponent in last year’s NBA Finals, the Golden State Warriors, takes place on Christmas Day. Tipoff is set for just after 5 p.m. ET.