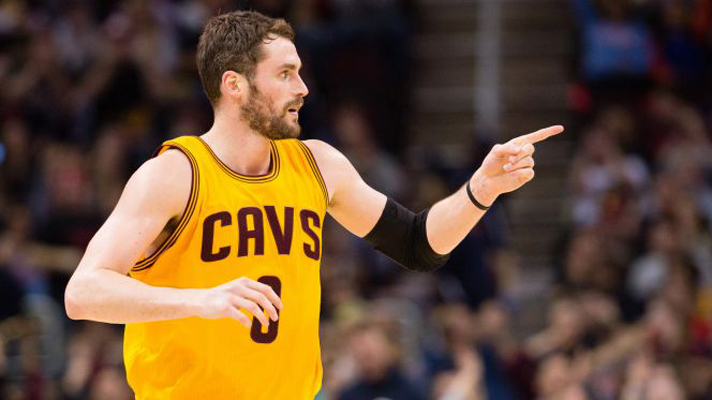 Thanks to his collective performance in the Cleveland Cavaliers’ three victories over a five-day span, forward Kevin Love was named NBA Eastern Conference Player of the Week on Monday, joining Golden State’s Kevin Durant, who won the same honors in the Western Conference.

Love may have clinched his accolade in the first quarter of last Wednesday’s 137-125 win against the Portland Trail Blazers. The power forward went wild by scoring 34 points in the first 12 minutes of action, establishing a new NBA record for the opening period. He finished with 40 points on the night, hitting eight 3-pointers during his onslaught.

Two nights later, Love again managed to play a key role in the Cavaliers’ 128-90 rout of the Dallas Mavericks. In 28 minutes, he scored 27 points and collected a double-double with 10 rebounds. He was again prolific from long-range, connecting on 7-of-9 in that category.

On Sunday afternoon against the Philadelphia 76ers, Love sustained a cut early in the game that needed stitches. Despite playing just under 28 minutes, Love still managed to score 25 points and grab 10 boards for his 11th double-double in the Cavs’ 15 games this year. That helped the Cavaliers come back to pick up a 112-108 win. He and Anthony Davis of New Orleans are the only two NBA players currently averaging at least 20 points and 10 rebounds in a game.

This marks the first time that Love has won the award in a Cleveland uniform. He twice won it as a member of the Minnesota Timberwolves during the 2013-14 season.