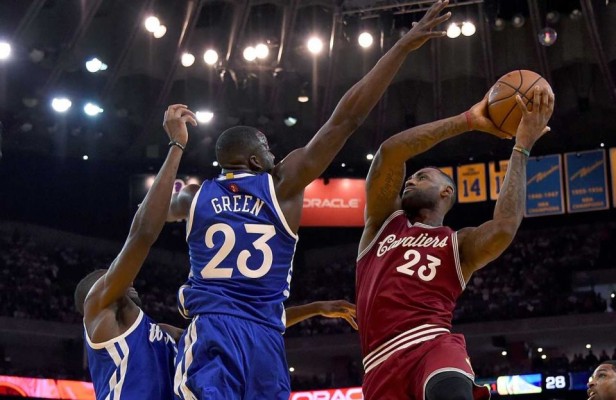 The Cavaliers struggled shooting the basketball from the field and free-throw line all night. However, despite their struggles, Cleveland never trailed by more than 10 points during the game.

LeBron James once again paced the Cavaliers with 25 points and nine rebounds, but he converted on just 10-of-26 shots from the field. Kevin Love scored 10 points and grabbed 18 rebounds, but was just 5-of-16 on the night.

The game centered around defense as the Cavaliers and Warriors both struggled to put points on the board. The Warriors were held to just 45 first-half points, and 65 points through three quarters. Both numbers marked their lowest totals in any game this season.

After a Draymond Green layup gave Golden State an 81-71 lead with just under four minutes remaining, a 6-0 run by the Cavs, highlighted by two dunks from James cut the Warriors’ lead to just 81-77. After the Warriors failed to score on the ensuing possession, James was fouled and missed both of his free-throw attempts with just 1:33 remaining in the game.

Following several back-and-forth baskets, James would end up at the free-throw line again with the Cavs down 85-80 and just 20.3 seconds remaining. The four-time MVP wound up converting on just one-of-two free throw attempts, as the Warriors eventually closed out the game with free throws of their own for the final points of the night.

“I love how much our guys compete. LeBron is one of the best players in the world, one of the most dominating forces there has ever been in our game, but we have guys that like that challenge (of guarding him).”

Steph Curry was stifled offensively as he was limited to just 19 points on 6-of-16 shooting. However, the reigning league MVP converted on clutch layups in crunch time to help seal the game for Golden State. Draymond Green led the Warriors’ offensive attack with 22 points, 15 rebounds and seven assists.

Curry was asked what the win over their 2015 Finals opponent meant for the Warriors:

“Any time you have a chance to win on your home court, you gotta take advantage of that. It’s a big win, we came out defensively and did what we were supposed to do.”

“I thought we game planned properly and executed that game plan. We just had to make more shots.”

Kyrie Irving—like the rest of the Cavs’ lineup—struggled in his third game back from injury. The 23-year-old point guard went just 4-of-15 from the field on his way to 13 points. J.R. Smith had 14 points on 4-of-9 from the field, with all of his field goals coming from beyond the arc.

The loss to Golden State ended a six-game winning streak for Cleveland.

The Cavaliers will continue their road trip when they travel to Portland to play the Trail Blazers at the Moda Center on Saturday night. Tipoff is set for 10 PM EST and the game will be broadcast locally on FSN Ohio.