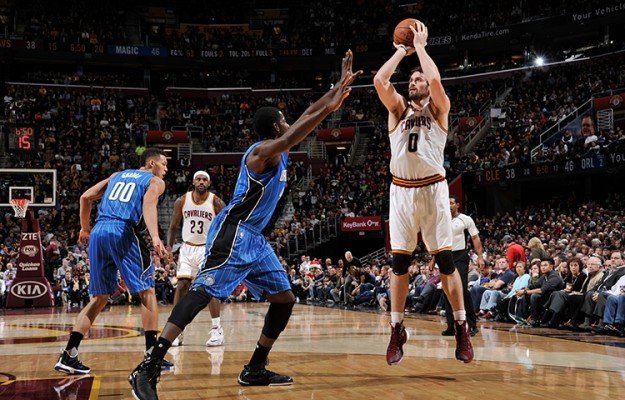 (Cleveland, OH) – Bouncing back from a 10-point second quarter deficit, the Cleveland Cavaliers answered with a 51-20 run to easily dispatch the Orlando Magic, 117-103, in Monday night action at Quicken Loans Arena.

After jumping out to a 15-4 lead, the Cavaliers led 22-10, but Orlando erupted for a 38-16 run that gave them a 48-38 advantage with 6:27 left in the half. The Magic made nine of its first 11 shots to start the second quarter, including seven straight attempts, but Cleveland would then charge back to close out the quarter with a 21-7 run of their own to lead 59-55.

That surge continued after the break, with the Cavs again outscoring Orlando 30-13 to take an 89-68 lead before the Magic chopped the margin to 16 at 92-76 by the end of the third quarter.

The main weapon on the night for the Cavaliers was the three-point shot, hitting 18 of their 35 attempts. That was one three-pointer away from the team record of 19, set last year against the Atlanta Hawks. Kevin Love and J.R. Smith paced the team in this department with six apiece.

Cleveland head coach David Blatt spoke about the three-point shooting on the night:

“I thought that every three that we took tonight was because of passing the ball and good execution,” Blatt said. “I thought we shot the ball well because we moved it around.”

Love (34) and Smith (26) combined for 60 points on the night, while LeBron James collected another double-double, contributing 15 points and 13 assists. Love, Tristan Thompson and Matthew Dellavedova each came close to double-doubles of their own, with Love adding eight rebounds, Thompson grabbing 14 rebounds and scoring nine points, and Dellavedova scoring 15 and dishing out nine assists.

James also entered rare territory during the game, becoming only the second player in NBA history to rank among the top 25 all-time in both points and assists, joining the legendary Oscar Robertson. He commented on the milestone’s meaning:

“I’m very blessed to have played with a lot of great teammates, and it’s very humbling to be linked with Big O,” James said.

Dellavedova spoke about his assist total :

“It’s a lot of fun to play that way, because then it goes from a good look to a great look,” remarked Dellavedova.

Scorching the net during the first two quarters, Love scored 27 points on 10-of-14 from the field, including 5-of-6 from beyond the three-point line. His most torrid stretch came in the span of just 72 seconds midway through the second quarter, when he drilled a trio of consecutive threes. For over eight minutes in the second period, he was the only offense the Cavaliers had, scoring 17 consecutive points.

Love simply noted that his 20-point second quarter was part of the team’s mindset:

“It was just one of those games, guys are going to step up,” said Love.

“He just had a great rhythm, and when I see something like that, I try to get him the ball,” commented James.

Showing excellent ball movement throughout the game, the Cavs racked up 34 assists on 43 field goals on the evening. Veteran Richard Jefferson talked after the game about the importance of such numbers:

“When guys are moving the ball and getting a lot of touches, it really helps the offense,” remarked Jefferson. “When you move the ball, you’re going to get the shot you want.”

James spoke about why he was able to rack up 13 assists for the night:

“I sensed early that they were doubling on me,” said James. “So I threw it to my guys, who were ready to catch and shoot.”

For most of the third quarter, the Cavalier defense clamped down on the Magic offense, limiting them to just 31 percent field goal shooting until Orlando made their final two attempts of the period. Whatever chance Orlando had evaporated when Cleveland began the fourth quarter with a 12-5 run, but they did chop it down to 12 points with just over three minutes left to keep the Cavaliers engaged.

Blatt spoke about how the the Cavaliers adjusted their defensive effort:

“We just decided to turn it up because we weren’t engaged,” commented Blatt. “We tightened up defensively and when we locked, obviously things changed.”

The scariest moment of the night for Cavs fans came with 5:13 left in the first quarter when James was hit hard on a drive to the basket and landed hard. He split two free throws, but for the remainder of the half, he failed to score on just one field goal attempt and two trips to the foul line. However, after the game, he indicated that there were no lingering health concerns.

The Cavaliers raised their record to 11-3 on the year, winning their third consecutive game, while the Magic fell to 6-8 on the season.

The Cavs will be away for their next two contests, traveling to Toronto on Wednesday night for a 7:30 p.m. ET contest, before traveling for a Friday night clash against the Charlotte Hornets.