Cleveland Cavaliers vs. Milwaukee Bucks Game Recap: Back in the Land 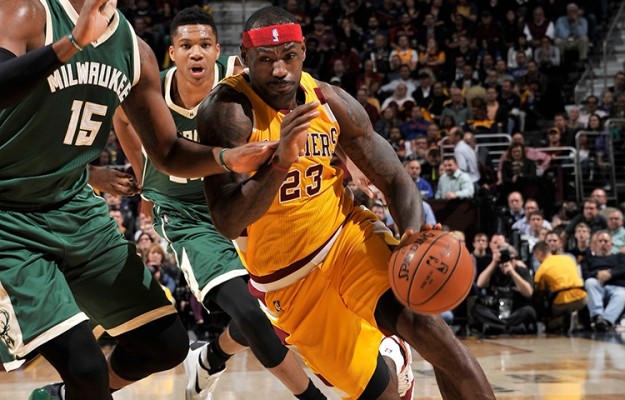 (Cleveland, OH) – LeBron James and Kevin Love combined for 49 points and 24 rebounds as the Cleveland Cavaliers got back on winning track with a 115-100 victory over the Milwaukee Bucks at Quicken Loans Arena on Thursday night.

James made the most of his shooting, hitting 9-of-13 field goal attempts and 8-of-9 free throws for a team-high 27 points. He narrowly missed a double-double with nine rebounds, while also handing out six assists.

Not focusing on his own numbers in postgame remarks, James noted some key aspects related to the effort:

“We had 17 turnovers, but I thought some of the turnovers were aggressive ones,” said James. “We have to continue to do the little things, like be a little gritty and take the charge.”

Love, who contributed 22 points and 15 rebounds, was one of two Cavaliers to pick up a double-double, with Tristan Thompson scoring 12 and hauling down 11 boards. Meanwhile, Matthew Dellavedova also came close to his own double-double with nine points and a career-high 13 assists.

Love was happy with the victory, but still saw an opportunity for the team to improve:

“We can still tighten things up,” Love said. “But we protected our homecourt, which is what we need to do.”

The Cavaliers took control of the game in the second quarter when they went on a 27-11 run to turn a 36-31 advantage into a 63-42 lead. However, the Bucks notched the last six points of the quarter in the final 40.8 seconds to make it 63-48 at the break.

Cleveland was able to make this push thanks to 61 percent shooting from the field and a 14-4 advantage on the boards. Their ball movement also remained strong, dishing out 18 assists during the first two quarters.

After leading 70-56 with 7:33 left in the third, Cleveland watched Milwaukee chip the lead down to as little as five before the Cavs ended the quarter with a basket to hold an 86-79 lead. Chief among the reasons for the Bucks comeback was their 67 percent shooting from the field, coupled with committing just one turnover. However in the fourth, the Cavaliers were able to hit a three to open the quarter and never let Milwaukee get closer than eight the rest of the way.

James commented after the game about some of the positives after two consecutive losses:

“It was a little more physical and we got better in some aspects, like outrebounding a good rebounding team by 21,” James said.

Cleveland head coach David Blatt spoke about the Bucks making it close during the second half, including a 28-12 advantage in the paint during the final two quarters:

“At times, we didn’t play dribble penetration as well as we needed,” said Blatt. “We maybe could have done a better job shrinking the floor.”

Dellavedova’s production came in handy since the Cavs were without the services of guard Mo Williams, who missed the game due to a foot injury. That absence depleted an already-thin backcourt, and during the first half, the toll of injuries continued when Timofey Mozgov suffered a right shoulder strain and missed the remainder of the game.

“What I liked about Delly’s game was that he made simple plays,” Blatt said. “There’s always a place for Delly on this team.”

Mozgov’s absence brought Anderson Varejao back into the Cavaliers mix, and the veteran responded with nine points and two rebounds in 11 minutes of action, while hitting all four of his field goals attempts.

While happy about the victory, James indicated that the team remains a work in progress:

“We played some good ball, but we gave up some transition layups in the second quarter,” said James. “I’m looking forward to seeing the film and checking out what we did wrong.”

When asked about what Varejao provided the Cavs, Blatt was effusive with his praise:

“Andy really gave us a lift. He’s worked very hard to get back into playing condition,” said Blatt. “He’s one of the main reasons that we won tonight.”

Love echoed Blatt’s comments when asked about Varejao’s contributions for the night:

The Cavaliers will stay home for their next matchup when they host the Atlanta Hawks in a Saturday night contest set to tip off just after 7:30 p.m. ET.