Don't Miss
Home / Videos / Video: Kid Gifts a Pair of LeBrons to a Classmate Who Was Made Fun of for His Shoes

Video: Kid Gifts a Pair of LeBrons to a Classmate Who Was Made Fun of for His Shoes 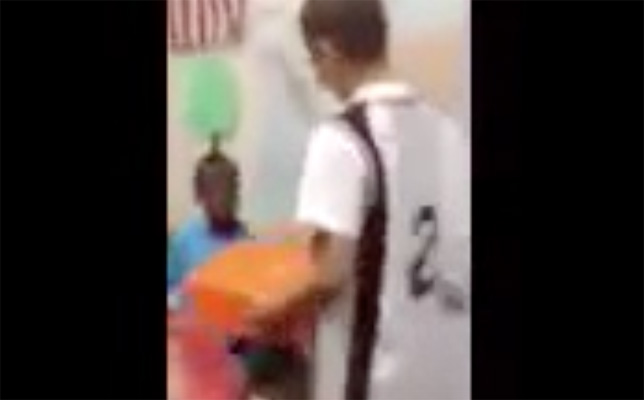 A heartwarming viral video that deals with the impact of bullying in schools has caught the attention of Cleveland Cavaliers forward LeBron James, since his sneakers play a key role in the emotional pull that the video helps provide.

The 30-second video, which was posted on YouTube on Tuesday and has already been viewed nearly 5.9 million times on Facebook, shows an elementary school student carrying a brand new pair of LeBron James Nike sneakers. Hiding them behind his back, he walks toward a fellow student and then gives him the sneakers, saying that they were being given to him because of an incident the previous day. In that instance, the other student was ridiculed for the shoes he was wearing.

An unseen person is heard exclaiming, “Are you serious?” before someone else thanks the student. The recipient of the gift gives an appreciative hug as thanks.

James was alerted to the video and posted it on his Instagram feed, which has over 15 million followers. He praised the student for his actions, saying: “You’re going to great places kid for your generosity towards him. True leadership right there! #StriveForGreatness #IPROMISE @ljff”

#Repost @bleacherreport ・・・ A kid gifted a pair of @kingjames shoes to a classmate that was bullied because of his shoes. ??? (via Facebook/Miguel Howell) You're going to great places kid for your generosity towards him. True leadership right there! #StriveForGreatness #IPROMISE @ljff