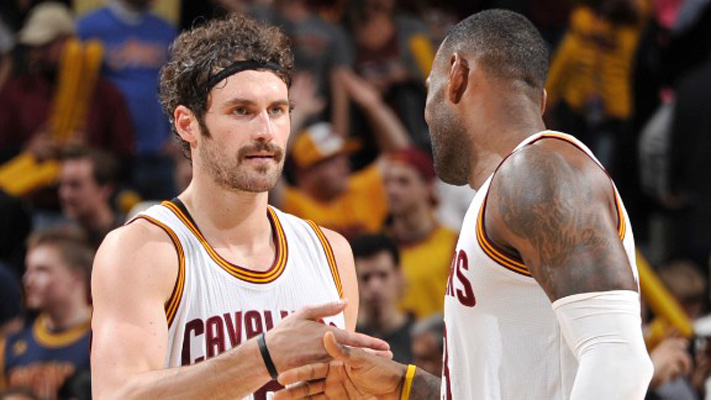 James’ pass inside to Love with just under 30 seconds left provided the Cavs with a huge cushion as they were clinging to a 95-92 advantage. However, Indiana’s Paul George answered with a three-pointer with 18.7 seconds remaining, and with the Pacers applying severe pressure on the ensuing inbound, Cleveland was able to get the ball to James, who again found Love for the basket that virtually clinched it.

Still, Indiana quickly inbounded at midcourt and scored with 6.7 seconds to go to make it 99-97. James was then fouled with 5.3 seconds left and converted both free throws to provide the final points of the contest.

“It’s something we’ve run before, but we haven’t run it often,” said Blatt. “But we executed it perfectly.”

Giving full credit to Blatt for the call, James made similar comments:

“It was a great call and we worked it to perfection,” James said.

The victory was the Cavaliers’ sixth straight since an opening-night loss to the Chicago Bulls on October 27, while Central Division foe Indiana drops to 3-4 on the year.

In something of a surprise, James started and played 35 minutes, while J.R. Smith sat out his third consecutive game with a knee injury. Just yesterday, James’s status was considered questionable, while Smith was expected to play, but when the game started, James was in the starting lineup and Smith was in street clothes.

Blatt spoke about his continuing amazement at James’ ability to will himself in the face of such nagging injuries:

“He’s unbelievable. Most guys wouldn’t play with that injury,” Blatt said. “Unbelievable, that’s the only word I can use to describe him.”

James led all Cleveland scorers with 29 and connected on seven of eight free throws down the stretch. The latter part was in contrast to his missing four of six attempts at the charity stripe during the earlier portion of the game.

Though James led in scoring, Love had a huge game with 22 points and 19 rebounds, powered by a strong second half that saw him score 19 and haul down 12 boards.

Asked afterward about what changed for him in the second half, Love credited James:

“LeBron told me at halftime, ‘You need to be around the basket and make things happen,’” said Love.

James explained his thinking behind the comments:

“I thought his energy was low on offense,” James said. “He started to do it, and started scoring and kept rebounding.”

Asked if the recent second-half surges were connected to those type of comments, James sought to emphasize the team-first philosophy:

“We’re all here for a common goal,” said James. “We need to check our egos at the door.”

Nearly joining Love in the double-double category was Tristan Thompson, who scored 16 while grabbing eight rebounds.

Love spoke about the chemistry between him and Thompson following the game:

“I told him as long as we clean up the boards, there’s no such thing as a weak rebound,” Love said.

The Cavaliers finished with 25 assists, led by the backcourt duo of Matthew Dellavedova and Mo Williams, who finished with nine and eight, respectively, for the afternoon. Williams also came close to a double-double by scoring 10 points.

Indicative of the back-and-forth pace of the game was the fact that there were 21 lead changes, as well as 15 ties. The biggest lead for the Cavs was 11 at 71-60, while the Pacers managed a four-point spread with just under three minutes left before the halftime intermission.

The final seven minutes of the first half saw each team put together runs, with Indiana’s 12-2 run soon eclipsed by a Cleveland 11-2 run to close out the half. In the latter case, James and Thompson contributed four points apiece, while Dellavedova got things started with a three-pointer.

The third quarter again had a rollercoaster of runs, with the Cavaliers using a 16-4 run to forge their biggest lead of the game at 71-60. However, a 13-3 run by the Pacers to close out the quarter put them just a single point behind with 12 minutes to play at 74-73.

One unique aspect of the game was that Cleveland center Timofey Mozgov connected for his first three-pointer of the year. Blatt joked about it in his postgame press conference:

“Timo’s been telling me for a year that he’s a three-point shooter,” Blatt said. “I’ve told Timo that if he makes the first, he can shoot another. He’ll probably make a commercial about it.”

Next up for the Cavaliers is a Tuesday night clash against the Utah Jazz, the first Western Conference team to visit Quicken Loans Arena this season. That game will tip off shortly after 7 p.m. ET and from there, the Cavs will play their next four contests on the road.