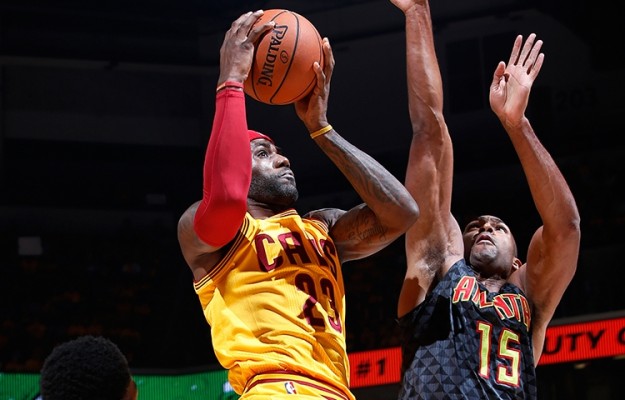 (Cincinnati, OH) – With no starter seeing more than 22 minutes of action, the Cleveland Cavaliers stubbed their toe to start the 2015 NBA preseason on Wednesday night, ending up on the short end of a 98-96 defeat to the Atlanta Hawks at the Cintas Center.

Four players finished in double figures for the Cavaliers with J.R. Smith (15) and Timofey Mozgov (13) combining for 28 for the starters and free agent reserves Austin Daye (12) and Jared Cunningham (10) combining for 22.

LeBron James finished with eight points, but led Cleveland with seven rebounds, five assists and three steals. The otherwise uneventful game saw the game’s most exciting moment come on the final points of the third quarter. Cavalier newcomer Richard Jefferson drove to the basket and contributed a thundering dunk with 12.8 seconds left in the quarter to make it 67-66 in favor of Atlanta.

Due to the current injury-depleted status of the Cavs, James was asked afterwards about the game, and indicated his new standard response to that query:

Early on, the first quarter saw both teams go on runs in the early portion of the stanza. Paced by James Jones, the Cavs went on a 13-1 run to turn an 8-5 deficit into an 18-9 advantage. Six of those 13 points came off of threes from Jones.

However, the Hawks quickly answered with seven unanswered points to slice the margin to a single basket. Mo Williams and Anderson Varejao then boosted the lead back to seven at 23-16, only to see Atlanta run off the final nine points of the quarter.

Smith provided the only Cavalier offense in the first few moments of the second quarter with a pair of baskets. James and Smith then sandwiched threes around a Mozgov layup.

Both teams went cold for a few minutes at the midway point, with the Cavs’ portion lasting for more than four minutes before the Hawks finished off 10 unanswered points to take a 41-35 lead. That surge continued for the rest of the half with a 9-5 push by Atlanta that gave them a 50-40 halftime lead.

In the third, it was a tale of two quarters, with the Hawks boosting their advantage to 13 at 63-50 with 7:13 left. For the rest of the quarter, the Cavaliers charged back with a 16-4 run to get within a point of deadlocking the contest at 67-66.

Cleveland would take a brief lead following two Sasha Kaun free throws, but Atlanta took control of the game with a 17-6 run to lead, 84-74, with just under six minutes left.

The Cavaliers were able to keep it close in the final portion of the fourth, with Daye drilling four three-pointers and Cunningham coverting a three-point play to chip the margin to just three, but an inability to convert a pair of threes in the final minute ended any chance of a comeback.

The Cavs stay on the road for their second preseason clash tomorrow night against the Philadelphia 76ers in a game set to tip off just after 7 p.m. James is expected to sit out the game to allow him to get some rest before the start of the regular season.