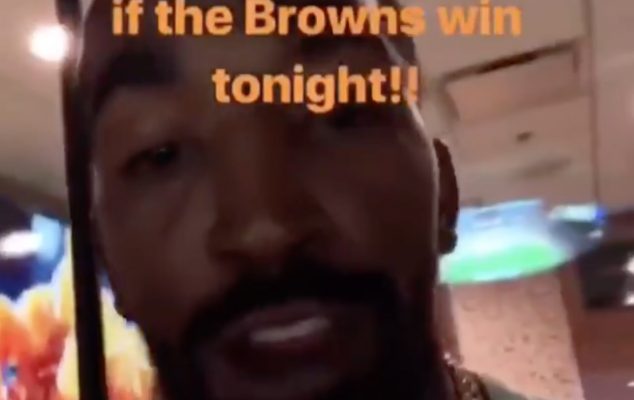 One of the lasting images of the Cleveland Cavaliers‘ 2016 NBA title celebration and its aftermath was the sight of veteran guard J.R. Smith without his shirt.

On Thursday night, Smith used social media to bring that style back in celebration of the Cleveland Browns winning their first NFL regular season game in 635 days.

Attending the Browns game against the New York Jets at First Energy Stadium, Smith indicated that he’d remove his shirt if the Browns completed their comeback from a 14-0 second-quarter deficit. After that was accomplished, Smith lived up to his word to celebrate the 21-17 win, the first for the beleaguered franchise since Dec. 24, 2016.

Smith’s previous shirtless run began almost immediately after the Cavs had completed an even-more stirring comeback from a 3-1 deficit in the 2016 NBA Finals. He was seen getting doused with champagne during the team’s impromptu trip to Las Vegas that night and then was shirtless again for the city-wide celebration that followed three days later.

In the latter case, the torrid conditions under which that celebration took place might’ve been seen as a legitimate reason for Smith to remove his shirt.

However, the continuous image of a shirtless Smith soon became ingrained in seemingly every sports fan’s memory. Even then-President Barack Obama, during a congratulatory call to Cavaliers head coach Tyronn Lue, jokingly said that Smith needed to put his shirt back on.

The 33-year-old Smith won’t have a great deal of time to focus on such mundane matters beginning next Tuesday, Sept. 25, when the Cavs open up their training camp. The veteran is looking to bounce back from consecutive seasons in which he’s struggled with injuries, personal issues, as well as controversies both on and off the court.

Another similar campaign could end up costing him money, since he’s only guaranteed $3.8 million of the $15.68 million he’s scheduled to be paid during the 2019-20 season.