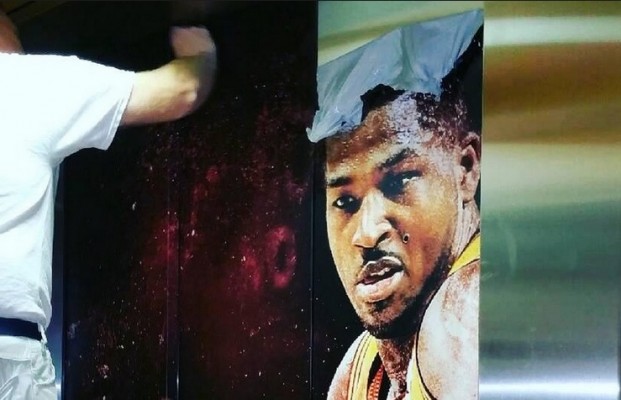 The latest salvo in the continuing Cold War between the Cleveland Cavaliers and restricted free agent Tristan Thompson came less than a day after Thompson officially became a holdout, when the team removed all Thompson-related merchandise from its Quicken Loans Arena store and online.

The Cavaliers and Thompson have been locked in a contract battle since the start of July. The team has offered him $80 million over five years, but Thompson and his agent Rich Paul remain steadfast in accepting only a max deal worth $94 million.

In addition to not selling the merchandise, Cleveland has taken an even bolder step by removing any semblance of Thompson’s likeness that had previously been seen at Quicken Loans Arena. The photo below is from a tweet by the Cleveland Plain Dealer’s Chris Haynes that shows an arena employee taking an image off one of the elevators in the building.

An elevator at The Q is getting a facelift today… pic.twitter.com/naNoWilFjl

In reality, Thompson is technically not a member of the team since he isn’t under contract. Therefore, the team isn’t allowed to sell merchandise that’s connected to him. Plus, there’s likely no chance that the team discarded the photos of Thompson, so if he chooses to sign a new contract, the team can simply put the likenesses back up.

The Cavaliers begin preseason play on Wednesday, October 7 with a matchup against the Atlanta Hawks to be played at Xavier University’s Cintas Center beginning at 7 p.m. The team will play their first regular season game on Tuesday, October 27 on the road against the Chicago Bulls.

cleveland cavaliersfeaturednews tickerTristan Thompson
← Previous Story Kevin Love: “We’re a Very Very Close Team…That Is Going to Take Us to the Next Level”
Next Story → LeBron James Urges Cleveland Cavaliers and Tristan Thompson to Get a Deal Done