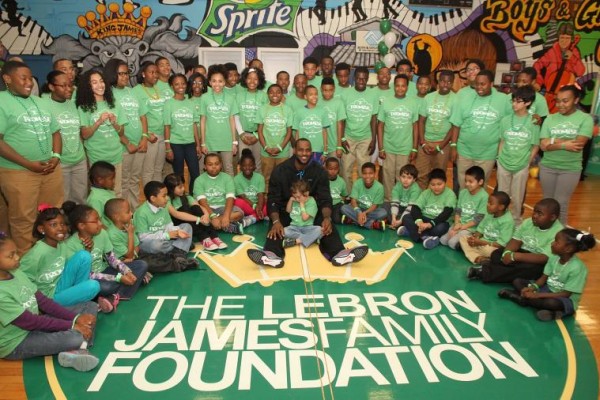 LeBron James will lead yet another venture that will aid in people furthering their education.

According to Joe Vardon of the Northeast Ohio Media Group, James’ new partnership with Project Learn of Summit County will allow parents of children that are involved in the LeBron James Family Foundation’s scholastic mentorship program to get their GEDs.

Vardon details the new program for adults, which will work similar to the one James has in place for the kids:

“The new program for adults is called ‘I PROMISE, Too’ and so far counts nine adults – who will be taught by instructors from Project Learn. Again, only parents or guardians of children in James’ mentorship program are eligible.

“In the new program, enrollees received an inspirational letter from the Cavaliers superstar basketball player, HP laptop computers that they can keep if they finish the classes, and free bus passes and parking to attend class.

“Participants will also have covered the $6 cost to take the GED practice test and $120 cost for taking the entire, official GED exam. The foundation will also provide prizes for good attendance, work progress, and other achievements.”

Michele Campbell, executive director of the LeBron James Family Foundation, commented on the announcement of the program through a news release:

“We are so excited about the I PROMISE, Too program because a huge part of our foundation’s work (with children) centers around parent involvement. This is an opportunity to help our parents make strides in their own academic careers so they are better equipped to help our students keep their educational promises. We can’t reach our students without their parents’ support, so this program is monumental for our families and their futures.”

James has been a big advocate of education over the course of his pro basketball career. His foundation spends at least $1 million per year on education. His Wheels for Education program has grown from 600 students in 2013 to 1,000 in 2015.

The Cleveland Cavaliers star has been a busy man this offseason. Outside of partnerships for his education programs, he has co-starred in a wide release film titled “Trainwreck.” He has also signed a content creation deal with Warner Bros.

While the four-time MVP will leave a huge legacy on the basketball court when he retires, he’ll undoubtedly leave just as big a mark off of it.