Even Without Kyrie Irving and Tristan Thompson, Cavs Still Team to Beat in East 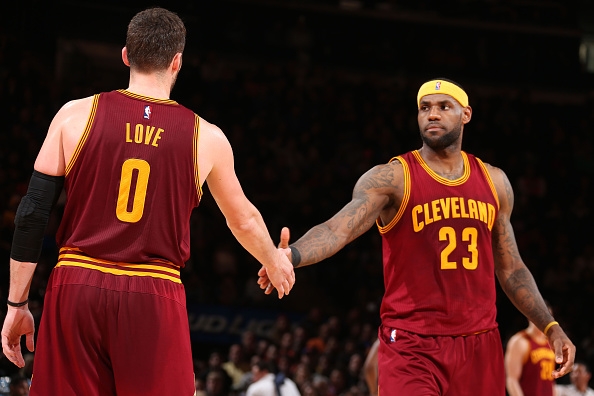 Shortly after the NBA Finals ended last season, Las Vegas oddsmakers established the Cleveland Cavaliers as favorites to win the 2016 NBA title. That was primarily due to their runner-up status from last season and the return of all their key roster components. Given the latter fact and the upheaval that’s taken place with many of their Eastern Conference opponents during the offseason, capturing the conference title could be eased ever so slightly.

For one thing, the Chicago Bulls have a rookie head coach at the helm in Fred Hoiberg, so some period of adjustment will be necessary as the Cavaliers discovered last year. In addition, the potential distraction of Derrick Rose’s messy off-the-court situation could drag on enough that it could affect the course of the team’s season.

Other teams that could be considered contenders include the Washington Wizards, who no longer have the veteran leadership of Paul Pierce to guide them; the Toronto Raptors, who have added quality players in the offseason, but have been flops come postseason; and the Atlanta Hawks, who have endured a rough past few months, with key player departures ripping a huge hole in the team fabric.

However, the most important reason for the Cavs’ confidence is because of the main cog in the entire machine: the all-world presence of LeBron James at forward. During this year’s NBA Finals, the depleted Cavaliers nearly pulled off a miracle run as James single-handedly willed the team to a pair of victories.

James has made it to five consecutive Finals, and badly wants to be the person who breaks the now 51-year curse of no championships in Cleveland. Some key additions will help him in that quest, including veterans Richard Jefferson, Mo Williams and Sasha Kaun.

In the latter case, Kaun will see his first NBA action but has eight years of playing experience in Russia, and has played for Cavaliers’ head coach David Blatt in the past. Meanwhile, Jefferson figures to contribute more than either Shawn Marion or Mike Miller did last year.

The return of veteran Anderson Varejao will also provide a boost, while the chemistry issues that plagued the team in the first few months of the 2014-15 campaign are a thing of the past. For one thing, having the already-integrated trio of Timofey Mozgov, Iman Shumpert and J.R. Smith for a full season will provide a kick-start that was lacking last season.

Another is the absence of any speculation about the future status of Kevin Love. He’s signed for years to come, so he can simply focus on playing the game. This year, the only concern might be in how quickly he returns to form after his season-ending shoulder injury.

Still, some glitches have come up during this period, each with their own issues that have some fans concerned about whether or not they’ll end up affecting a possible championship run.

The first has become a summer-long soap opera, with Tristan Thompson’s expected re-signing being held up by debates over his status as an elite player worthy of a max contract.

More recently, Thompson’s agent, Rich Paul, has raised the idea of the 6’10” forward leaving as a free agent after this year by saying, “A Tristan Thompson qualifying offer will be his last year with the Cavs.”

The other was something that developed only within the past week, with word that Kyrie Irving may be out of the lineup until January while he continues to rehabilitate his broken kneecap. Some claim that Irving will be ready much sooner, but given the headaches the Cavs dealt with in regards to Irving’s health last year, they’ll likely err on the side of caution when it comes to officially putting him back on the court.

When it comes to Thompson, there’s nothing really to be concerned about this year. That’s because regardless of whether he signs a long-term deal or takes the team’s one-year qualifying offer—which would make him a free agent next July, he has to play for the Cavaliers or he sits out the season.

No Kyrie, No Problem

Regarding the absence of Irving, the fact that Williams is there to replace him should set fans’ minds at ease. In his last three seasons as a starter, Williams has averaged roughly 30 minutes a game, and the only two times in 12 seasons that he’s failed to score at least 10 points a game were seasons where he was used exclusively off the bench.

In fact, Williams showed last year that he can put up much more than that. While with the Minnesota Timberwolves, he torched the Indiana Pacers for 52 points, then averaged 17 points per game in 27 contests with the Charlotte Hornets.

Williams is capable of producing like that, but given the firepower on the Cleveland roster, he won’t be expected to handle that role. James will be the main scorer, while Love will good for about 13 shots a game or more, as he was last year. In addition, Smith will take an average of 11 shots in every contest.

When the team signed Williams, team general manager David Griffin said, “Mo is a proven, high-caliber playmaker and his ability to space the floor at either guard position will be essential for us.”

The Cavaliers will have a veteran to keep a handle on things until Irving gets back, and will also have help from Matthew Dellavedova, who established himself as a brief phenomenon during the NBA Finals. Dellavedova also won’t be counted on to put up any large numbers, simply because his game has a certain threshold that prevents that from happening. However, he can provide some quality backup minutes that should be enough.

The Cavs’ first game is less than two months away, but all signs still point to Blatt’s squad being the team to beat. So whatever blips that are currently on the radar simply shouldn’t be a cause for concern.