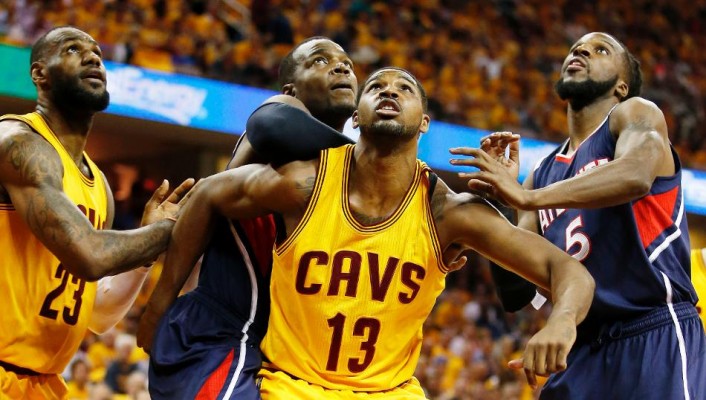 The negotiating stance of Tristan Thompson and his agent Rich Paul became a lot more heated with the Cleveland Cavaliers on Monday, with Paul saying that unless Thompson received a max deal from the team, the forward would leave after the 2015-16 season.

Canadian sportswriter Michael Grange released a pair of tweets on Monday that first stated Paul’s threat, while the second clarified that negotiations are continuing between the two sides.

“All I know is TT on Qualifying Offer will be his last year with the Cavs” — Rich Paul on Tristan Thompson negotiations.

To clarify earlier tweet: Thompson negotiations are on-going BUT — if he has to settle for QO offer, he will not return to Cavs in 16-17

Thompson will be with the Cavaliers for the upcoming season regardless of what transpires, but if he and Paul reject the team’s multi-year offer, Thompson would accept the team’s qualifying offer of $6.8 million. Doing so would allow the forward to become an unrestricted free agent at the conclusion of the upcoming campaign.

Paul has been negotiating with the Cavs ever since Thompson became a restricted free agent on July 1. Since an early report of an agreement being reached that first day proved to be unfounded, the stances of the two sides were thought to be continuing on signing a long-term deal.

Thompson and Paul are looking to exploit the fact that an expected huge increase in the salary cap will mean that not only the Cavaliers, but many other teams will have plenty of money to throw around the 2016 batch of free agents.

That fact is coupled with the opinion of at least one general manager that Thompson would be one of the most sought after free agents in that group.

Thompson first rejected a four-year, $52 million deal with Cleveland just prior to the start of last season. He then went on to have an outstanding year, particularly during the postseason that saw the Cavaliers reach the NBA Finals.

However, Thompson’s overall game is thought by many to not be worthy of a max deal, considering he has only averaged 10 points per game during his NBA career. In addition, his 63 percent free throw shooting potentially handicaps the Cavs in close games.

Still, LeBron James stated during the postseason that Thompson should be paid what he’s worth and that he should be a Cavalier for life. Compounding those remarks is the fact that Paul is James’ agent, and he will look to be negotiating a long-term deal with the team next year for James’ services.