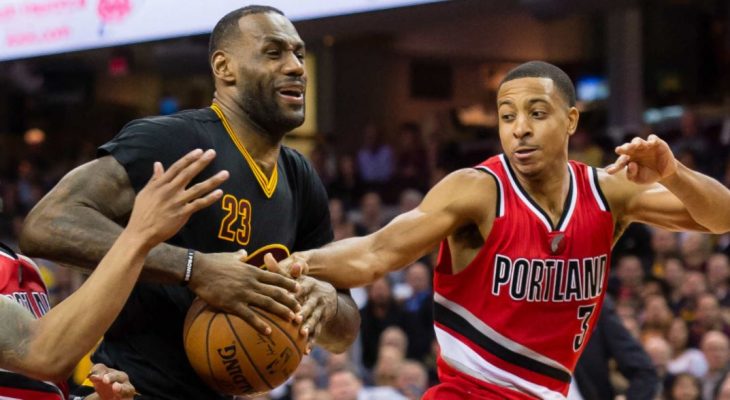 As July and the start of free agency gets closer, the level of intrigue with respect to the future status of Cleveland Cavaliers forward LeBron James remains high. Though he may again sign with the Cavaliers, countless other teams will definitely be in pursuit of his services, with one Portland Trail Blazers player musing that James will again leave Cleveland when that time arrives.

Trail Blazers guard C.J. McCollum, as part of a lengthy dual interview with backcourt teammate Damian Lillard, hinted to ESPN.com’s Chris Haynes that his hometown roots serve as the basis for making that assessment. McCollum is a native of Canton, which is close to James’ hometown of Akron:

Chris Haynes: People say you guys are one piece away. And probably one of the biggest pieces to hit free agency would be LeBron James this summer. Where do you guys think he’ll end up?

CM: You know, I’m from Canton, Ohio. I ain’t trying to start no rumors or anything like that, man. But streets have been talking to me, man.

Damian Lillard: What you heard? What the streets saying, man?

Of course, McCollum’s level of seriousness regarding the comment is open to question. Plus, he presumably has no inside knowledge of James’ leanings and would undoubtedly want him to play for Portland. One of the strongest connections that James does have to the Portland area is his lucrative relationship with Nike, whose world headquarters are in the vicinity of the city.

Another aspect that might be seen as a positive by Trail Blazers fans came following last week’s Cleveland-Portland game when James offered thanks to the Portland crowd for its enthusiasm toward him.

At this point eight years ago, the Miami Heat weren’t seen as a strong contender for James’ services, yet that’s where he ended up playing for four years. Right now, patience will be needed to discover James’ ultimate destination.

The Cleveland Cavaliers have been fairly quiet so far in terms of deals prior to the trade deadline. While...