What Role Will Anderson Varejao Play If the Cavs Sign Sasha Kaun? 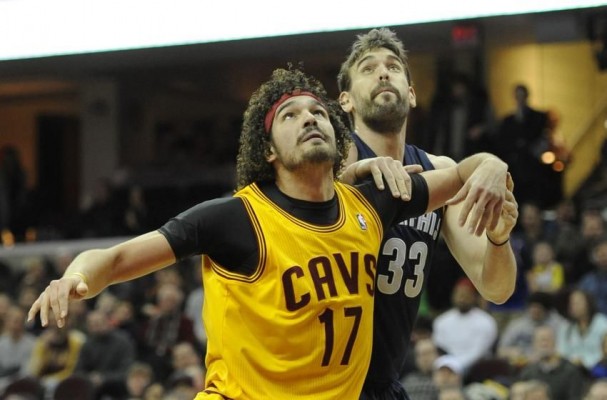 Given the increasing speculation that the Cleveland Cavaliers will be signing Russian center Sasha Kaun to a contract, the overall role of veteran Anderson Varejao with the team becomes more of an issue since they would both play the same role.

The soon-to-be 33-year-old Varejao will most likely still need some time before he attempts to come back from his season-ending Achilles injury suffered last December 23. When things tip off for the Cavaliers on October 27 in Chicago, he could very well be placed on the injury list.

That’s because what happened to Kobe Bryant — when he tried to rush his 2013 rehabilitation from the same injury — is still fresh in the training staff’s mind. Bryant’s career hasn’t been the same since.

While Kaun isn’t that much younger at 30, he doesn’t have the growing injury issue that shadows Varejao. However, Kaun will have an adjustment period after having played the past eight seasons in Russia. Those adjustments include not only the improved level of play within the NBA, but the difference with respect to certain rules.

One important fact in relation to Varejao’s health difficulties is that all of his major injury problems have come when he’s been forced into a starting role. That won’t be a concern this year, since head coach David Blatt’s starting five is virtually set in stone.

During the first LeBron James era, Varejao’s only major injury was a severely sprained ankle in early 2008 that kept him out close to a month. Until James departed for Miami in 2010, Varejao had started less than 20 percent of his 388 games as a member of the Cavs. Once Varejao was forced to start in the team’s severely depleted lineup, he proceeded to miss 165 games over the next three years.

From a fractured cheekbone, fractured wrist, ankle injuries, and most seriously, a season-ending blood clot in early 2013, Varejao was seemingly always injured. Of the 81 games he did play during that time, he was a starter in every game.

In 2013-14, Mike Brown only started him in 29 of his 65 games, with the only real problem being a bad back that plagued him for most of February.

Last season, Varejao had started in all but one of the first 27 contests when his season came to an abrupt end against the Minnesota Timberwolves. In those 26 games, the evolving Cavaliers had a 16-10 record.

Looking ahead to the 2015-16 season, Varejao is no longer going to be looked upon as a vital cog in the lineup. True, he still brings unrelenting energy to the court, but his $9.7 million salary for this year is seen as more of an expendable luxury that the Cavaliers would like to send elsewhere.

The problem is that no team will take on that kind of a contract for what will be a 33-year-old with an increasingly mounting injury reputation. Still, that doesn’t mean that the Cavaliers can’t make the most of Varejao’s talents, especially since Kaun’s development trajectory is uncertain.

Given that Kaun and Varejao will both serve primarily as Timofey Mozgov’s backups, both players really only have to contribute for 10-15 minutes a night. Coupled with Mozgov’s average of 25 minutes that he averaged throughout the 2014-15 season, that would give the team a viable option in the middle for an entire game.

Varejao is likely capable of playing more, but his style is that of a high-energy player whose ability (and health) diminishes the more he’s on the court. In Cleveland terms, he’s the Matthew Dellavedova of the frontcourt.

However, he’s also like Tristan Thompson in that he’s in the game to crash the boards and leave the shooting to any one of the numerous options the Cavaliers have available. As long as he’s sweeping the glass clean, he’s contributing to the team’s success, and given the short time he’ll be needed during each game, his energy can be at full throttle.