Cleveland Cavaliers vs. Golden State Warriors Game 5 Recap: On the Brink of Elimination 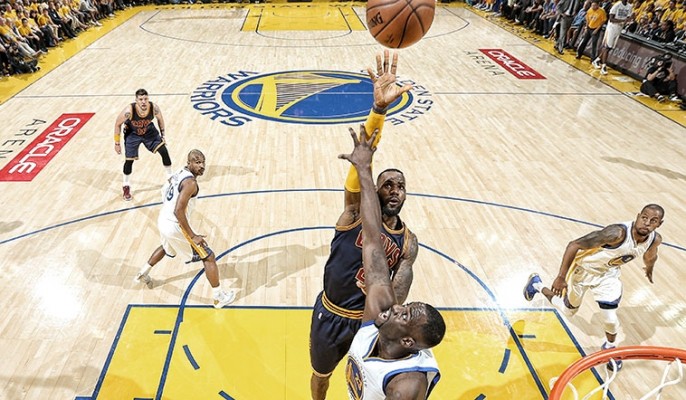 (Oakland, CA) — In a mostly back-and-forth contest throughout Sunday evening, the Cleveland Cavaliers (2-3) eventually fell 104-91 to the Golden State Warriors (3-2) in Game 5 of the NBA Finals at Oracle Arena, despite an amazing triple-double effort from LeBron James.

Warriors point guard Stephen Curry was outstanding, especially down the stretch of the fourth quarter. The 2015 NBA MVP rained three pointers and highly difficult shots on the Cavs’ defense en route to 37 points (13 of 23 from the field and seven of 13 from behind the arc) to go along with seven rebounds, four assists and two steals.

“When I have an opportunity to go one-on-one, I gotta be really aggressive and get them off balance to shoot the three,” said Curry after his team’s victory. “It’s the Finals. There’s a lot of story lines and we’re out here just trying to compete. One through five, we all know we can hit the big shot.”

Curry, who struggled with his shot during the first three games of the NBA Finals, was absolutely on fire in Game 5 to lead his team to a huge victory on their home court. The Cavs, who were within one point with just under five minutes remaining in the fourth quarter, simply could not get the job done down the stretch.

“Sometimes you’ve got to take your hat off to the guy,” said Cavs head coach David Blatt on Curry’s performance and impact. “He made some tremendous shots.”

“The mentality is this will probably be the hardest game any of us have ever played,” said Iguodala on his team’s upcoming Game 6 in Cleveland. “We know how to adjust, stay physical, but not let it take us away from who we are.”

Warriors shooting guard Klay Thompson, who had a relatively quiet game on the night, finished with 12 points, three boards and two assists. Forward Harrison Barnes came up a bucket short of a double-double, as the University of North Carolina product had eight points, 10 boards, two assists and two steals.

In his team’s loss, James built on an already-impressive series with yet another stellar game. The 11-time All-Star exploded for his second triple-double of the 2015 NBA Finals with 40 points, 14 boards, and 11 assists.

“We had no energy in Game 4 at home,” said James on the upcoming home game in Cleveland. “We can’t repeat that or they’ll raise the trophy for sure.”

James joined elite company in Wilt Chamberlain, Magic Johnson and Larry Bird as the only players in NBA Finals history to record multiple triple-doubles in the same series.

“Tremendous is an understatement for how LeBron’s played this series,” said coach Blatt in his post-game press conference.

Already facing enormous odds without the presence of stars Kyrie Irving and Kevin Love, there was not much help from James’ supporting cast on Sunday night. J.R. Smith, who got off to a great start in the game with 14 points in the first half, was unheard of in the second half.

Tristan Thompson had a great game on both ends of the floor, as the power forward recorded a double-double with 19 points (six of 11 from the floor and seven of 10 from the charity stripe), 10 boards, two blocks and two steals. Iman Shumpert, who was the only other Cavs player to score in double figures, had 10 points (three of six from three-point range) as well as five rebounds and two assists.

Strangely, despite his 28 points and 10 rebounds in Game 4’s 103-82 loss, Timofey Mozgov went scoreless in only nine minutes of action in Game 5, a decision Blatt made to go with a smaller lineup to keep up with Golden State.

Up next, the Cavs will head back home and look to stave off elimination during Game 6 at Quicken Loans Arena on Tuesday night. The contest, which is scheduled to tip off shortly after 9:00 pm ET, will be broadcast nationally on ABC.