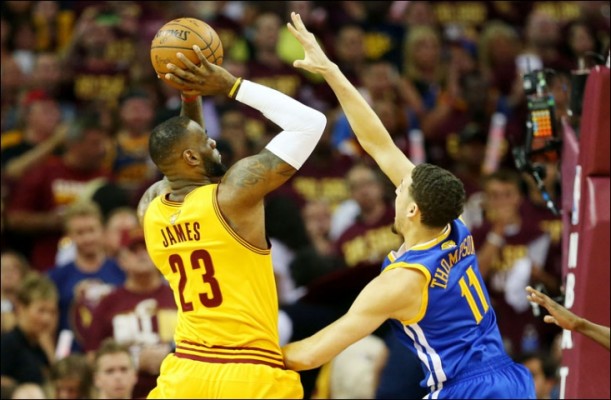 (Cleveland, OH) –Trying to overcome weak outside shooting from their backcourt proved to be too much for the Cleveland Cavaliers to overcome as they dropped Game 4 of the NBA Finals, 103-82, to the Golden State Warriors on Thursday night at Quicken Loans Arena.

The defeat evens the series at two games apiece as it heads back to Oracle Arena in Oakland for a pivotal Game 5 on Sunday night.

The Cavs’ four guards managed to make just seven of their 38 field goal attempts during a game that saw the team nearly come back in the third quarter. This included hitting just a trio of 23 attempts from beyond the three-point line. A downcast J.R. Smith gave a brutally succinct description when asked to describe his current game. “Horse(bleep),” said Smith.

LeBron James attempted to bolster Smith’s sagging spirits by saying afterward, “It’s not falling for him, but you don’t give up on him.”

Cavaliers head coach David Blatt noted the likelihood of fatigue catching up with the team, saying, “Tonight was the third game in five nights, and it seemed to have an effect on us.”

Matthew Dellavedova appeared to be warming up as the second half got underway by hitting a pair of threes in the opening minute of action, but he began to cramp up again, sending him to the bench for a few minutes. During this stretch, Cleveland was able to get the deficit down to nine.

However, the Warriors answered with a pair of baskets to push the lead back up to 13 at 63-50. It was at that point, that the Cavaliers pieced together a 12-2 run to slice the margin to just three at 65-62 with 5:11 left in the third.

A number of other opportunities presented themselves to reduce the lead below that, but each time, Golden State prevented it and took a 76-70 lead entering the final 12 minutes.

James spoke about that comeback attempt and why it didn’t last, saying. “I ran through those 12 minutes in the third, and (then) I gassed out.” He also mentioned what worked and what didn’t, adding, “Defensively, we were still pretty good, offensively we were terrible.”

The Cavs would never come close again, with the Warriors beginning to pull away as the fourth quarter moved along. The Cavaliers failed to hit a field goal in the final six minutes of the game, with Golden State taking its largest lead at 102-79 with 1:17 to go in the contest.

In that final quarter, virtually the only Cleveland offense could be generated by center Timofey Mozgov, who led all scorers with 28 points. Mozgov was the team’s lone scorer over an eight-minute span, accounting for all seven points.

Afterward, Mozgov said, “We’ve got to watch the film and find the mistakes and see what we can do better. We all have to learn something from this game.”

Mozgov, James and Tristan Thompson each collected a double-double on the evening, with James coming two assists shy of another triple-double. Still, the backcourt woes proved to be fatal to the hopes of taking a 3-1 lead.

Blatt explained James’ 20-point effort by saying, “I think we were a little slower in our sets, and it made it a little more difficult for him to score.” James’ scoring was far lower than his first three games, where he had averaged 41 points per contest.

Thompson echoed Mozgov’s comments by saying, “It was just one of those games where we have to look at the film and bounce back.”

The start of the game was in direct contrast to the previous two matchups, with a fast-paced first quarter that was filled with plenty of offense. The Cavaliers tallied the first seven points of the game, then later held another pair of seven-point advantages before the Warriors chipped away at the deficit, keyed by a pair of three-pointers.

Golden State took their first lead at 22-20 on a layup from Klay Thompson with just over four minutes left in the quarter, then continued to push forward until they had a 31-22 lead with 31.7 seconds to go in the stanza. That capped a 22-6 run, with Tristan Thompson’s turnaround jumper with under 10 seconds to go making it 31-24 after one quarter.

Cleveland would get no closer during the second quarter, with the Warriors extending the lead to as much as 15 at 48-33 with 3:54 remaining. By the time the halftime horn sounded, the Cavaliers had reduced the margin only slightly, trailing 54-42.

The keys to the first half success of Golden State was their ability to focus their efforts on defending James and daring the Cavs’ backcourt to hit their shots.

One example of how frustrating it was for the Cavaliers on the night came with 4:43 to go before intermission. James drove to the basket, was fouled and tumbled out of bounds. During that tumble, the side of his head struck a camera causing cuts that briefly stopped the game. The multiple lacerations that resulted were treated and James remained in the game.

James talked about what he was thinking when he hit the camera, saying, “I was just hoping I wasn’t bleeding. The camera cut me pretty bad.”

In assessing the defeat, Blatt commented, “Obviously, they made some adjustments. Give them (Warriors) credit.”

Golden State now have homecourt advantage back, with Cleveland needing to win twice in three potential tries to capture their first NBA title. Game 5 will get underway at Oracle Arena on Sunday at just after 8 p.m. Eastern.