Don't Miss
Home / Editorials / Next Man Up: Why the Cavs Are Still in Great Shape to Win This Year’s NBA Finals

Next Man Up: Why the Cavs Are Still in Great Shape to Win This Year’s NBA Finals 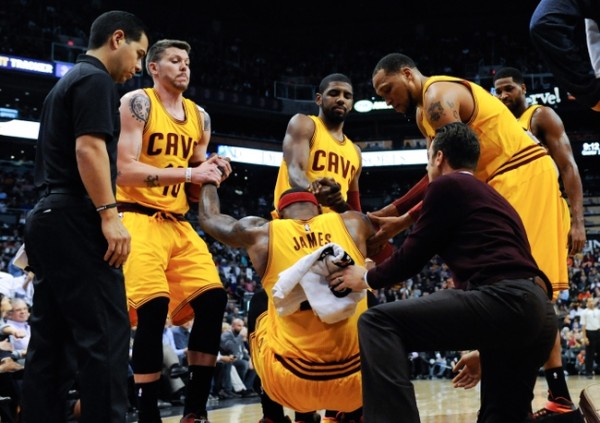 While news of Kevin Love‘s absence from the rest of the Cleveland Cavaliers’ playoff run was tough to swallow, there was likely some sense of déjà vu when it came to the focus of LeBron James. That’s because three years ago, he dealt with a similar situation where a key starter missed a good portion of the postseason and yet, James was still able to lead his team to an NBA title.

In that circumstance while playing for the Miami Heat, James was in the midst of playing in the first game of the Eastern Conference Semifinals when his then-teammate, Chris Bosh was forced to leave the contest against the Indiana Pacers with a lower abdominal injury. The issue developed after a Bosh dunk during the first half of a game that Miami ended up winning.

A subsequent MRI showed that Bosh was suffering from an abdominal strain and was expected to miss anywhere from between two to four weeks. At the time, James said, “We’re moving on as if he’s not going to return in this series, but we’ll see.”

Bosh didn’t return for the remainder of that series, with the Heat losing their first two games without him. However, Miami bounced back to win the next three games to clinch the series. Prior to the next season, Bosh admitted that he thought the team’s chances for a title had evaporated when he went down.

The Heat was able to accomplish this by relying on James and Dwyane Wade, the latter of whom was struggling with injuries. In those three victories, Wade averaged 33 points a game.

Unlike Love, Bosh did return, playing 14 minutes in Game Five of the Eastern Conference Finals, following an absence of three weeks, with both teams having split the first four games. While Miami lost that matchup, James had yet another monster game in Boston to stave off elimination, which was followed by a Game Seven victory. From there, a championship was won in five games over the Oklahoma City Thunder.

Bosh himself contributed 13.5 points and 8.5 points per game in the eight games after returning. Finding someone or some group of players to make up amounts like that will serve as the biggest roadblock for the Cavaliers going forward, and will likely demand that, as James indicated, someone step up.

When Bosh went down, one of the unexpected benefits the Heat got from the injury was the success that forward Shane Battier enjoyed once he was inserted in Bosh’s spot. The beginnings were a little bumpy, but by the Finals, Battier had indeed stepped up and had become a solid contributor, especially from long range.

While Love will make no such return, a performance like Wade’s is certainly possible. In the Cavaliers’ scenario, numbers like that from Kyrie Irving would come during a season in which he’s scored over 50 points twice. In addition, his health is much better now than Wade’s was during that 2012 postseason.

James was forced to play the power forward role during that time, and will undoubtedly have to do it this time as well. It’s a bruising duty, but James has shown in the past that he’s up to such challenges. In 2012, he saw both his average points and rebounds per game increase by three each, once he was forced to handle a heavier load.

He’ll get help in this department from Tristan Thompson, but Thompson has to find a way to pick up his scoring to make up for the 16 points per game that Love was averaging. That’s virtually twice the amount of Thompson’s regular season contribution.

Still, that leaves open the small forward spot, which will likely be bolstered by a committee of veteran players combining efforts over a 48-minute period. Those three: Shawn Marion, James Jones and Mike Miller, were basically hand-picked by James last summer to sign with the Cavs, given their experience in pressure-type situations like the playoffs.

The fact that none of them have played more than 60 games during the regular season might turn out to be a benefit for Cleveland, since their legs won’t be worn down from the grind of the regular season. Marion can provide solid defense, and given his pending retirement, would love to go out on top as an NBA champion.

Meanwhile, both Miller and Jones will be needed to try and make up some of Love’s scoring output. While both can be deadly from beyond the three-point line, Miller didn’t see the floor during the Boston series and Jones needs to improve from his two of 11 in three’s against the Celtics.

Love averaged just over 18 points in his three full playoff games, so in theory, the Cavs would only need six points per game from each of the three veterans to make up that difference.

Rebounds will be where Love’s absence will likely be felt the most, since getting the nine per game that Love had in those first three contests will be next to impossible for those veterans. That means the trio of Timofey Mozgov, Thompson and James will have to pick up the slack.

Another key aspect to focus on is the fact that Miami was able to win in 2012 by relying primarily on defense. In their 23 postseason contests that year, Miami was 14-5 when they held their opponents to under 100 points and 8-2 when they kept it under 90.

With respect to the Cavaliers, the absence of Love may actually help them when it comes to clamping down on defense. Love’s defense has been criticized since he first joined the NBA, and while he’s improved somewhat this past year, his effort remains a work in progress.

No one is saying that the task ahead for the Cavs hasn’t become more formidable, but given the parallels between two teams headed by James, it’s certainly not a futile situation. Finding a way to get past their next opponent should be the only thing on their mind, especially when they won’t have the services of J.R. Smith for the first two games. Establishing some new chemistry on the fly will be difficult, but Cleveland has the players who have experience doing it.