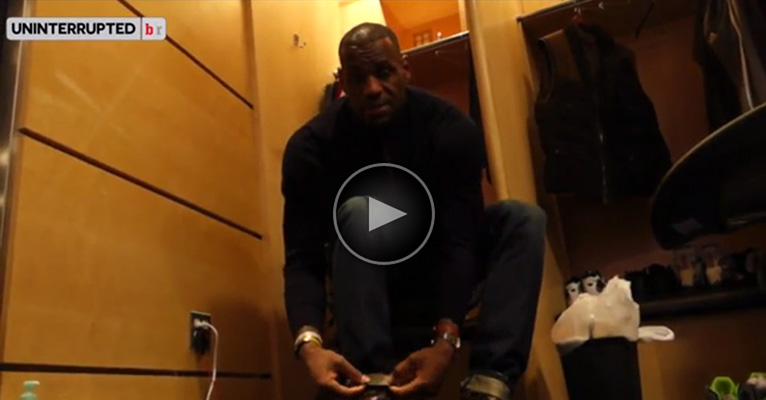 Following two hard-fought playoff wins at home, the Cleveland Cavaliers now make their first road trip during the postseason. If they’re able to come away with two victories in Boston, they can start planning for the Eastern Conference semifinals, which was as far as they got during their previous trip to the playoffs five years ago.

However, in postgame comments on Tuesday night after the team’s 99-91 win, LeBron James noted that in order to accomplish a task like that, the Cavaliers need to eliminate the mistakes they made in the opening two contests. Those errors saw them fall behind in the first half each time, only to charge back after the break.

James first complimented the Boston Celtics, by saying that they were, “a very well-coached team. They gave us everything they had.” James then talked about the need for solid defense, saying, “You’re not going to be able to win playoff games all the time offensively, because things get tight.”

When watching these road games, the magic number to be concerned with seems to be 13. During this past regular season, that was the threshold that pretty much spelled the difference between winning and losing away from home.

James emphasized the need to avoid turnovers on Thursday saying, “Our main focus for Game 3: we’ve got to be better. Less mistakes, including myself. We’ve got to be more locked in, more focused.”

The Cavs played 18 games on the road where they committed 13 turnovers or less, and their record in those contests was a sparkling 15-3. When that number was in single digits, the team’s record was 7-1.

All three of the losses were by five points or less, with two of them being games that Cleveland could have won. The first came during the first week of the campaign, when the Cavaliers battled back to tie the Utah Jazz in the closing seconds—only to see the Jazz come away with a buzzer-beating 102-100 win. In that game, the team committed 12 turnovers.

The second loss came during the depths of James’ absence against one of the worst teams in the league, the Philadelphia 76ers, on January 5. With Kyrie Irving also sitting out due to injury and Dion Waiters having been dealt to the Oklahoma City Thunder as the game began, the Cavs only committed 11 turnovers, but wasted a 17-point lead midway through the third quarter in a 95-92 loss.

When it comes to the Celtics, Cleveland’s one victory in Boston this season was a dramatic fourth quarter 122-121 comeback powered by James. Despite playing miserably for three quarters, the Cavaliers only committed 11 turnovers.

On the other end of the spectrum, once Cleveland committed its 14th turnover in a road game, they were in deep trouble. In those 23 games, the Cavaliers managed to win just seven times. Oddly, in the 10 road games where they committed the most turnovers, they managed to split those games.

While the game that happened to have the most Cavs turnovers was in Boston, that game can be thrown out of consideration since 80 percent of the team’s starting lineup didn’t even take the floor in a 117-78 blowout loss on April 12.

Thus far in this playoff series, Cleveland has committed 12 and 18 turnovers, respectively. However, going over that 13-turnover barrier is a little easier when it’s not in enemy territory as the Cavaliers proved during the regular season when they managed to win two-thirds of the 21 games where they had 14 or more.

Winning the third game would take a good deal of pressure off the Cavs and put them in position to sweep the series on Sunday. Regardless, the simple fact remains that reducing on-court errors will serve as the ultimate litmus test regarding their ability to establish themselves as road warriors at the most important time of the year.

boston celticscleveland cavaliersfeaturedkyrie irvinglebron jamesnews tickerOklahoma City ThunderPhiladelphia 76ersUtah Jazz
← Previous Story J.R. Smith: ‘I Don’t Think Anyone Can Beat Us’
Next Story → LeBron James: ‘I Love Road Games In The Playoffs, I Get Up For Those Games’