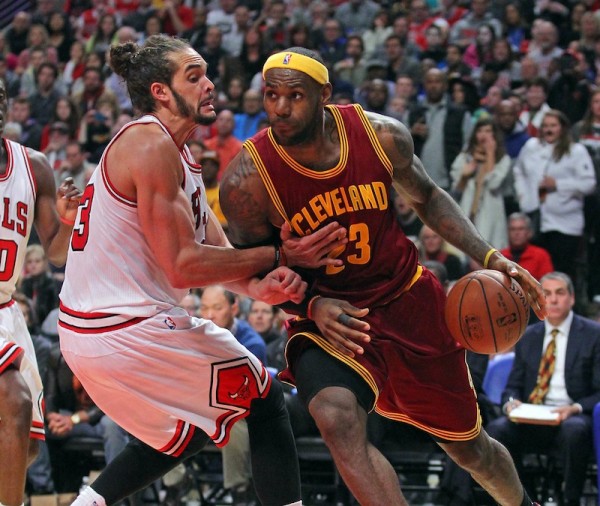 (Chicago, IL) — The final game on the NBA calendar, before the week-long All-Star break begins, features the Cleveland Cavaliers and Chicago Bulls in a nationally televised matchup that could give the Cavs the lead in the Central Division and the third-best record in the Eastern Conference.

The Bulls are in the midst of a three-game winning streak, having knocked off the Sacramento Kings, 104-86, on Tuesday night. That contest marked the team’s first home game after a rollercoaster 3-3 road trip that saw them start by knocking off the Golden State Warriors—before then losing to the woeful Los Angeles Lakers, which started a three-game losing skid.

Meanwhile, Cleveland has won 14 of their last 15 games, the most recent coming last night in a 113-93 home win over the Miami Heat. Improved defense has been the key aspect, with the Cavaliers holding 10 of the 14 teams that they have defeated under 100 points.

One of those games was between the Cavs and Bulls in a January 19 matchup. There, the Bulls were without the services of Joakim Noah, and his absence showed in the Cavs’ 108-94 win.

Not surprisingly, the Cavaliers have been the NBA’s hottest team over the past month, while the Bulls have been playing just under .500 ball, allowing Cleveland to make up what had been a wide gap in the standings.

The Bulls will be without their leading scorer Jimmy Butler, who strained his shoulder in the first half of Tuesday night’s win. Butler was unavailable the last time the Cavaliers traveled to Chicago. In that game on Halloween night, Cleveland needed a late push to send the game into overtime before winning by a 114-108 score.

Tony Snell will play in place of Butler, having averaged 18 points in the last three games and coming off a career-high of 24 against the Kings.

Also absent from the Bulls’ lineup for the third consecutive game will be guard Kirk Hinrich, due to a turf toe injury on his left foot. In the Halloween clash, Hinrich tallied 20 points, hitting on a trio of threes.

On the other hand, the Cavs may be without the services of power forward Kevin Love, who suffered a right corneal abrasion after being poked in the eye by Mario Chalmers during the third quarter of Wednesday night’s game. He’s currently listed as questionable and his status could be determined during pre-game warmups. It’s also conceivable that he could play the game wearing protective goggles.

If Love is unable to go, look for another twin dose of LeBron James and Kyrie Irving to power the scoring. The pair had a mild night against the Heat, combining for just 33, due to seven different Cavaliers scoring in double figures.

One of the most important players in the Cavalier lineup tonight figures to be center Timofey Mozgov, who will be handling Chicago center Pau Gasol. That’s because limiting Gasol’s shot selection has been one of the keys to beating the Bulls this year.

Chicago is 23-6 when Gasol shoots above 50 percent, but a mediocre 10-14 when he’s kept below that threshold. That was the case in the January 19 win, when he made just four of his 14 shots on the night.

Fighting fatigue may also be a factor for Cleveland, since they’ll be playing their second game in as many nights. On the second night of back-to-back games, the Cavs actually have a winning record at 8-6, including a 3-1 mark since their surge began with consecutive wins at the Staples Center against the Lakers and Los Angeles Clippers.

After tonight’s game, James and Irving head to New York to take part in Sunday night’s All-Star game, with Irving also competing in Saturday night’s Three Point Shootout. The next Cavalier game will take place on Friday, February 20 when they travel to the nation’s capital to face the Washington Wizards in an 8 pm ET contest.