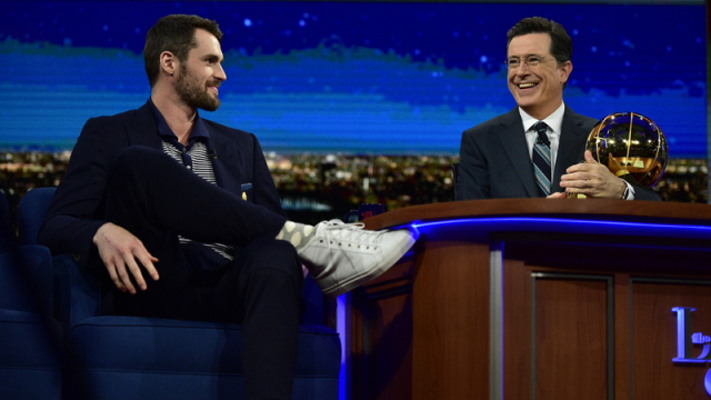 With the Larry O’Brien Trophy right by his side, Kevin Love traded wisecracks Monday night with Stephen Colbert about the WWE, the shirtless ways of J.R. Smith and the roughhouse tactics of Draymond Green.

Naturally, Love’s appearance on the CBS late night talk show would not have been possible had the Cleveland Cavaliers not become the first team in NBA history to erase a 3-1 Finals deficit and end the city’s 52-year professional sports championship drought. Love was the first teammate whom LeBron James embraced after time expired in Game 7 against the Golden State Warriors and the emotions began to flow as freely as the champagne in the hours which followed.

“I didn’t want to be the one guy that was searching for someone to hug,” Love said. “I tried to find the one person that everyone was most likely to hug and that happened to be ‘Bron…It was a special moment, something I will always remember…That was a warm, cuddly embrace at the end there.”

Describing his return from a shoulder injury he suffered in the first round of the 2015 playoffs and everything that transpired in the 14 months afterward as “surreal,” Love was acutely aware of the significance to what the Cavs accomplished.

“Truthfully the last two years we were a team that always thrived under chaos so, for us, we just looked at it as our backs were against the rope,” Love said. “We knew we could get it done. We had all the stats and everybody talking saying we couldn’t do it and we knew [we could].”

Saying “against the rope” instead of “against the wall” was as much of a giveaway of Love’s fondness for professional wrestling as the custom-made WWE belt he brought with him which included the Cavs logo. He told Colbert the entire team is pretty much “obsessed” with ’90s wrestling icons, particularly Steve Austin and The Undertaker.

When the plane carrying the Cavs back to Cleveland touched down, Love emerged brandishing his belt and James holding the championship trophy aloft. But the two of them were upstaged to a large extent by the sight of Smith’s tattoo-covered torso, with his bare-chestedness continuing two days later during the downtown victory parade with an estimated 1.3 million fans in attendance.

Love couldn’t help but shake his head and chuckle thinking about Smith.

“I live vicariously through him,” he said. “He’s one of a kind.”

The NBA’s suspension of Green for punching James in the groin during the fourth quarter of Game 4, the latest such transgression by the Warriors forward, helped set in motion the Cavs’ comeback in the series. Colbert left Love at a loss for words when he asked, “Was there ever a fear that if you were up against Draymond Green that you thought to yourself, ‘He’s going to work my balls like a speed bag?'”

Love had a team-high 14 rebounds in Game 7 and was widely praised for his one-on-one defense in the final minute against Stephen Curry with the score tied at 89.

“I really had to put on my dancing shoes on with him because I knew he was going to throw everything at me,” he said. “I had to do everything I could to stay in front of him and luckily I was there.”

And when Colbert ended the interview by asking whether the Cavs could repeat in 2017, Love sounded like someone itching for training camp to already start.

“That’s the plan,” Love said. “We get everybody back, we feel like we can.”