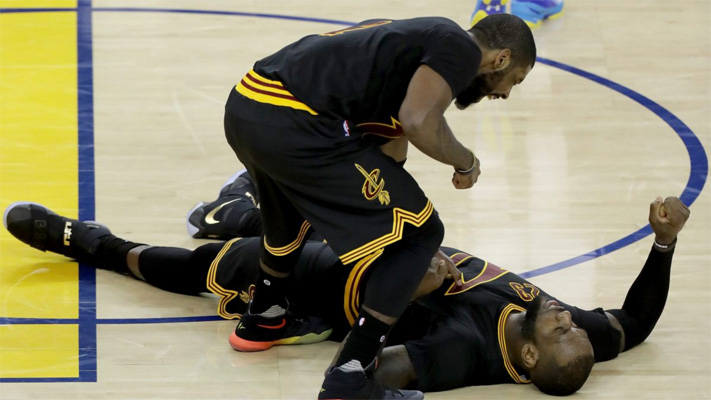 (Oakland, CA) – Behind 41 points each from Kyrie Irving and LeBron James, the Cleveland Cavaliers managed to keep their NBA title hopes alive with a 112-97 victory in Game 5 of the NBA Finals over the Golden State Warriors at Oracle Arena on Monday night.

The win now makes it a 3-2 series in favor of the Warriors, though the Cavs will have home-court advantage for Game 6 of the best-of-seven series.

The dual performances by James and Irving became part of league history since it marked the first time ever in NBA Finals history that two teammates had scored 40 or more points in the same game. James managed a double-double by adding 16 rebounds, contributing seven assists along the way. Meanwhile, Irving’s scoring barrage came via deadly shooting that saw him connect on 17-of-24 shot attempts, while dishing out six assists

“We wanted them to be aggressive and we needed them to attack,” said Cleveland head coach Tyronn Lue about Irving and James.

The pair essentially served as the Cavs’ offense on the evening, with J.R. Smith the only other player to score in double figures with 10 points. On the rebounding front, Tristan Thompson hauled down 15 boards.

“(I) just continued to stay aggressive and stay in transition,” Irving said right after the game. “We were attacking matchups and we just have to have consistency with that going into Game 6.”

The key factor in what had been a back-and-forth contest was the Cavaliers’ ability to clamp down on the Golden State offense during second half. In the third period, the Warriors shot just 29 percent from outside, then followed that up with even worse numbers by connecting at just a 24 percent clip in the fourth quarter. During the entire second half, Golden State only managed to score 36 points and shot a weak 27 percent from the field.

“We’re just happy we have another day. That’s all we could ask for, so we’re going to start preparing for Game 6 tomorrow.” James said. “I understood the magnitude of the game, how great that team was and we were able to do it.”

The first two quarters were sparked by an individual scoring shootout between James and Golden State’s Klay Thompson. James closed out the half with 25, including a pair of three-pointers, while Thompson topped him with 26, six of them on long-range shots.

“I think our spacing was pretty good tonight,” Irving said. “Guys were in their spots and it helped Bron and I get in the lanes.”

James, Irving and Smith served as virtually the entire Cleveland offense during the first two quarters, racking up 53 of the 61 points the team scored. Meanwhile, the three-pointer was the Warriors’ main weapon during the half, connecting 11 times. That and good ball movement allowed them to keep pace with a Cavs team that shot over 50 percent from the outside in each period.

“He’s one of those guys who can create his own shot,” Lue said of Irving. “We told him to take advantage of it.”

The Warriors were without the services of starting forward Draymond Green, who had been suspended for his actions during Game 4. Then, in the opening moments of the third quarter, they lost center Andrew Bogut who sprained his knee after trying to block a Smith shot attempt.

“Our guys understood that this was the final countdown,” James said. “We had to come out mentally focused, mentally prepared, mentally sharp. Our coaching staff gave us a great game plan and we executed it.”

Game 6 will be back at Quicken Loans Arena on Thursday night, with tipoff set for just after 9 p.m. ET. Should the Cavs win that contest, Game 7 will take place back in Oakland on Sunday night just after 8 p.m. ET.