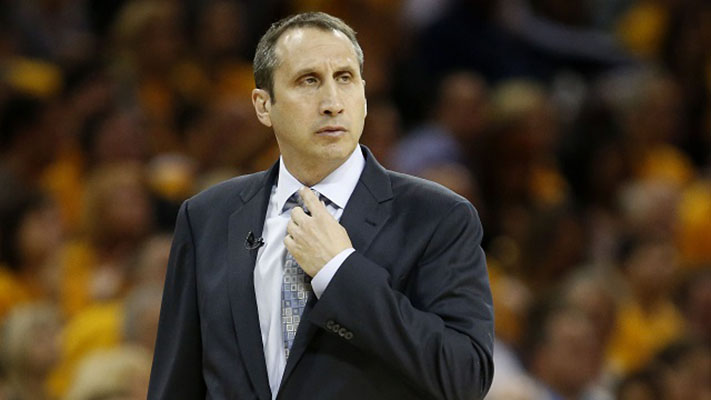 With the second year of the David Blatt era less than a month away from starting for the Cleveland Cavaliers, the level of concern that seemingly followed the long-time mentor throughout the 2014-15 season appears to have finally faded away.

That pressure began the moment that LeBron James announced his return to Cleveland in July of 2014 and picked up speed through the ups and downs of the few inconsistent months. It then reached its peak in mid-January in Phoenix when “The Push That Wasn’t,” which involved James and Blatt, took place during a loss that saddled the team with a 19-20 record.

After a few months of virtual serenity that coincided with a strong surge into the postseason, the criticism of Blatt resurfaced during Game 4 of the Eastern Conference semifinals. There, he nearly called a timeout he didn’t have in the closing seconds of a tie game, whereby the Cavaliers would have been assessed a technical foul and likely would have fallen behind 3-1 in the seven-game series.

Instead, a buzzer-beater by James sparked a seven-game winning streak that took them into the NBA Finals. There, Blatt had the misfortune of missing — for five of the six games in that series — two of his “Big Three,” due to the season-ending injuries to Kevin Love and Kyrie Irving.

So with all of that in his rear view mirror, will Blatt finally be able to get the recognition that eluded him last season? Derided as someone with no NBA experience who merely did James’ bidding, Blatt showed that despite all of the turmoil, he was able to at least get the team to the Finals—undoubtedly, with a monstrous boost from James. Had fate been kinder, he would have had other weapons available to perhaps hoist the Larry O’Brien trophy.

One major difference this year is that the uncertain relationship between Blatt and James that bubbled up during the first few months of last season looks to have been smoothed over.

That was in evidence just prior to the start of the Finals, when James endorsed Blatt’s efforts:

“Being a rookie coach in the NBA and being able to take this team to the Finals, I think he’s done a hell of a job.”

Since James is the linchpin of the entire team (as evidenced during his absence and the Finals), if he’s content, then the rest of the team will fall in line.

Irving and Love appeared to have no problem with Blatt last season. However, with the duo’s past injury history, the path to playing in June will likely be determined by how many minutes OFF the court Blatt can give them.

Meanwhile, having the trio of Timofey Mozgov, Iman Shumpert and J.R. Smith around for a full season reduces the need for Blatt to conduct the chemistry experiment on the fly that was needed last year.

The lack of depth at point guard that doomed the Cavaliers in the Finals should also be sharply reduced, since Mo Williams will hold things down until Irving returns in January, if not before. That will keep Blatt from being forced to play Matthew Dellavedova extensively, since no other alternative existed previously.

Blatt’s previous relationship with Mozgov made for a smooth transition after the deal with Denver was completed last season. This year, having Mozgov around should speed up the development of another Russian big man that Blatt has a history with: Sasha Kaun.

The tandem of Shumpert and Smith can be very effective in certain instances. However, Shumpert needs to stay healthy and Blatt needs to make sure that Smith emerges from the double funk of a disastrous Finals performance and the embarrassment of being forced to take less money than he had already been guaranteed.

Blatt’s handling of James Jones really doesn’t need to change, since the veteran’s career has been winding down for the past few years anyway. Therefore, if Jones simply matches his output from last season, Blatt’s flexibility with him is secure.

The dicey health status of returning veteran Anderson Varejao demands that Blatt find a happy medium when it comes to how many minutes to use him. Like Dellavedova, Varejao can be effective in short bursts, so keeping a tight rein on the veteran’s minutes throughout the year is the best way to get the most out of him.

Given the improved depth of the team, Blatt won’t have to find minutes for the departed Mike Miller. The small contributions Miller made last year can likely be covered with a little more production from Joe Harris.

After last season, Cavs’ general manager David Griffin noted how Blatt was able to succeed amid the chaos:

“I think one thing David (Blatt) did as well as anybody I’ve ever seen, and I wish I did better, was just ignore the noise from the media perspective. Because frankly, none of that means anything. We know what actually takes place here.”

Dealing with the Tristan Thompson situation, however, could be Blatt’s biggest issue in 2015-16, especially if Thompson chooses to accept a qualifying offer. That means Blatt will spend the entire year coaching what’s perceived to be a lame duck, if agent Rich Paul’s threats are to be believed.

Another issue will be to make sure that Richard Jefferson doesn’t become this year’s Shawn Marion, who became virtually invisible beginning last January. Part of that was due to injury, but even when Marion returned, Blatt showed no inclination to use him.

Jefferson has been durable for most of his career, and with the team going on record that they’ll try to give James (and Irving) reduced minutes, that durability figures to be an ace that Blatt didn’t have last year.

While Blatt does have the pressure of being chosen by various outlets as the team to beat in 2015-16, many of the issues that were present a year ago simply don’t exist anymore. Having gone through his rough baptism last season, Blatt’s experience should come through a little more clearly. That means he’ll be a better coach, simply by default, and hopefully he can lead the Cavs to a shiny Larry O’Brien trophy in 2016.