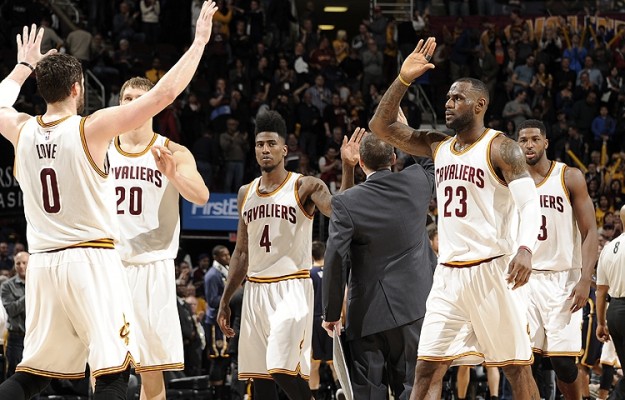 (Cleveland, OH) — The Cleveland Cavaliers (45-26) edged out a win against the Indiana Pacers (30-38) Friday night at Quicken Loans Arena for the team’s 15th home win in a row.

The game felt like a playoff matchup from the tip, with both teams playing hard-nosed, physical ball throughout.

The Cavs gained the upper hand early behind an energized performance from Timofey Mozgov, who ended the first quarter with six points, five rebounds, and a steal, setting the tone for what would turn out to be knife fight in a phone booth.

While the game was certainly ugly, Coach David Blatt was encouraged by his team’s physical performance.

“We have tried to raise our level of physicality in the last few months and I think we’ve done a good job of that,” Blatt said. “There’s physical play and then there’s correct play. If you’re just physical and not playing correctly there’s not a great deal of value. You want to have both of them together. Play the game right and play the game hard and if you want to compete at the highest level, you have to be physical.”

The home team jumped out to an early lead, but the Pacers rallied behind standout performances from George Hill and Roy Hibbert who kept Indiana in the game till the last second.

The Pacers managed to keep it close due in large part to the up and down play of LeBron James, who was listed as questionable with an illness before the game. The illness was clearly affecting James to start the game as he recorded only two points and one assist in the opening quarter.

And yet, despite all that, James rose to the occasion and took over the game down the stretch. To close out the victory, LeBron scored 11 straight points on his way to 13 fourth quarter points, 29 overall. It was a uplifting performance on a night when the Cavs certainly needed it.

For the Pacers, Hill continued his streak of being a monumental thorn in the Cavs’ side. Hill pestered Kyrie Irving all night on defense, making it difficult for Irving to score, which in turn disrupted the Cavs’ offensive flow.

Hill’s impact wasn’t just limited to the defensive end, as he led the way for the Pacers with 24 points on 9-15 shooting. The Cavs defense adjusted well to close out the game however, and held Hill to just two points in the fourth quarter.

Dellavedova (Delly) brought some momentum back to the Cavs and their fans with a second-half three point bombardment that had the bench and the arena on their feet.

“You see it on the bench how much fun we’re having,” Love said after the game. “We were out there having fun, cheering (Delly) on, and that’s the type of team this is.”

Delly finished the game with 11 points, while shooting 3-4 from three-point range.

The win locks up the Cavs’ first playoff berth since 2010, and gives the team some breathing room ahead of the encroaching Toronto Raptors.

There’s not much time to rest unfortunately as the Cavs travel to Milwaukee Sunday for another potential playoff preview against the Milwaukee Bucks.