Cleveland Cavaliers vs. Miami Heat Game Recap: Cavs Run Out of Gas in Loss to Heat 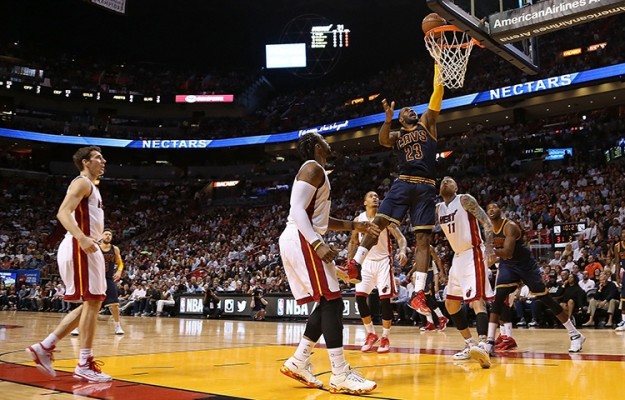 (Miami, FL) – Showing some obvious hangover from their win on Sunday night, the Cleveland Cavaliers had trouble putting the ball in the basket and were dominated on the boards as they dropped a 106-92 decision to the Miami Heat at American Airlines Arena on Monday night.

The Cavs trailed by as many as 25 midway through the third quarter, appearing listless throughout the contest. Indicative of that was the team shooting just 38 percent for the game, compared to a sizzling 55 percent by Miami, a figure that was at 64 percent at the half. They also lost the battle of the boards, 45-32.

Cleveland made something of a comeback in the fourth quarter, getting the margin down to a respectable 12 with just under three minutes left, but the deficit was too large to overcome.

LeBron James (26) and Kyrie Irving (21) combined for 47 points, but Irving’s shooting touch wasn’t there after two strong games in which he scored a combined 90 points. James scored half of his total during the fourth quarter, while Irving hit just five of his 15 field goal attempts, including two of seven in three-point attempts.

James noted the fatigue factor by saying, “I feel like our legs gave out on us and they exploited that.”

Irving noted a number of reasons for the defeat, saying, “Obviously, we took a hit tonight. Defensive breakdowns cost us.” He also gave credit to Miami, saying, “They were the better team tonight. It wasn’t our night.”

The Cavaliers got off to a slow start at the outset, falling quickly behind by a 9-2 score. The lead would build to 10 at 15-5 with 8:01 to play in the first quarter before the Cavs called time to regroup.

It took a few more minutes before Cleveland was able to get back in the game, going on an 11-2 run to tie the game at 22. That surge was capped by a three-point play from Timofey Mozgov.

However, that would be the high point of the game as Miami answered with a run of 11 unanswered points, including five to close out the first period with a 27-22 advantage.

The second quarter proved to be even worse for the Cavs, who appeared ready to get back in the game after getting four straight points from Iman Shumpert to make it 37-33 with 5:35 to go before intermission.

Following those scores, the Heat put together a 19-5 run to close out the half, including 13 straight to start the push. Dwyane Wade did most of the damage, connecting on six baskets before closing the quarter with two free throws with 23.4 seconds remaining to make it 56-38. His last field goal gave Miami its biggest lead of the half at 19.

During the first half, the Heat not only shot 64 percent, but held a 25-12 advantage in rebounds.

Nothing improved after the break, with the Cavaliers only getting within 17 after a three from J.R. Smith early in the third to make it 58-41. A 13-5 run over the next four-plus minutes by the Heat ended any hopes of a comeback.

By the end of the third quarter, the Cavs still trailed by 20 at 83-63, with Miami once again inching up the lead back up to 24 in the final quarter.

While a number of starters were removed in the fourth, James stayed in the game, even though the team has spoken all season about getting him rest, a solid opportunity coming in this lost cause. He finally left the game for good with just under a minute left.

After the game, James was asked about his fourth quarter effort, saying, “I made shots, found a good groove and put pressure on their defense.” Asked why he was still out there with the game out of hand, he said, “I need to be out there for my teammates.”

Kevin Love was once again held out by Blatt, but Shawn Marion made a return to action in the fourth quarter with the game effectively decided, scoring five points.

Blatt remained upbeat about the course of the season, saying, “The week was a successful one, but it obviously didn’t finish the way we wanted.” However, he refused to discuss the upcoming postseason, saying, “We’re not talking playoffs. We’ve got 14 games to go.”

The Cavaliers now look to bounce back as they return home to host the Brooklyn Nets in a Wednesday night game at Quicken Loans Arena, with tipoff set for just after 7 p.m. ET.