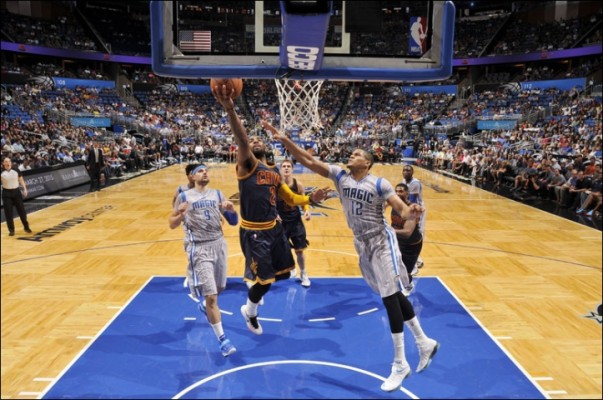 (Orlando, FL) – A torrid second quarter of outside shooting helped shake off some early doldrums for the Cleveland Cavaliers as they took control to knock off the upset-minded Orlando Magic by a 123-108 score on Sunday night at Amway Center.

The win marked the team’s fourth straight win and sixth in the last seven contests. Since January 15, the team is 24-5.

Leading the way for the second straight game was Kyrie Irving, who finished with 33 points. Joining him in the scoring parade was J.R. Smith with 25 and LeBron James with 21. Irving hit 12 of his 15 field goal attempts, including five of six threes, which gives him 12 threes in 13 attempts over the past two contests.

Talking about his past few games, Irving said, “It’s just a different feel going into the game. For me, it’s just about figuring the game out.” He also added, “You don’t put much pressure on yourself. You just want to go out and enjoy the game of basketball.”

James also handed out 13 assists and hauled down eight boards to lead the squad in both categories. He said later in the locker room about the team’s 18 three-pointers, “Every game presents different challenges. Tonight, it was a challenge to drive to the basket.”

Cavaliers head coach David Blatt noted James’ assist total in postgame comments, saying, “I thought LeBron was able to see everybody in the gym.” However, did note the continuing excellence of Irving by noting, “He’s locked in and aggressive, and focusing on defense.”

Cleveland took control of the game in the second quarter when they scored the first 11 points to turn a 28-26 deficit into a 37-28 lead. By the end of the quarter, they had connected on 16 of 20 from the field and were hitting at just under 62 percent for the first half.

To begin that push, James Jones and Matthew Dellavedova sandwiched threes around an Iman Shumpert three-point play. Shumpert then tossed a dazzling assist to James for a layup to quickly make it 37-28.

Orlando would only get as close as three during the remainder of the half, but the Cavaliers then went on a 9-2 late first half run, and ended up heading into intermission with a 66-55 advantage.

Once play resumed the Cavs maintained their double-digit lead, twice extending it to 18 in the third quarter. Powering the offense was the backcourt of Irving and Smith, who combined on five threes.

After the game, Smith noted the team’s 26 assists on the night, saying, “We moved the ball extremely well. A lot of our points are coming on breakdowns, thanks to our defense. We have to get more efficient on offense.”

Cleveland’s overall shot selection also remained sharp as they entered the final quarter hitting 61 percent from outside for the contest. By the end of the third, the Cavaliers held a 100-86 advantage.

The fourth saw the Magic almost get the margin down to seven with less than five minutes to go, but a steal by James led to him scoring the next time down the court. That sparked an 11-2 run to end the threat and put the game away.

James’ steal itself was not without controversy, when a fan sitting at a courtside seat touched the ball as James was reaching for it. After originally awarding the ball to Orlando, the officials reversed the call.

Afterwards, James commented about the play, saying, “I saw Shump streaking and I was getting ready to throw the ball. Then they called fan interference.”

At the outset, neither team shot the ball well in the early going, which included a pair of free throw misses from Irving, but the Magic were able to open up a pair of six-point leads. That didn’t last long as the Cavaliers quickly reduced the deficit to one point on two occasions.

However, after Smith’s three tied it at 16 with just over five minutes left in the quarter, Orlando scored eight of the next 10 points to boost their advantage back up to six at 24-18 with three minutes left.

The Cavs twice more got within one at 27-26, the latter coming on a three-point play by James after he drove to the basket and was virtually clotheslined in the process. The Magic added a free throw to make it 28-26 after one quarter of action.

Blatt acknowledged the slow start, saying, “We started a little sluggish in the first quarter, but we made some normal rotations, we brought the first team back in and they took control of the game.”

James also noted the early struggles in postgame remarks, saying, “They kept getting second chance points, but we cleaned that up.”

Jones attributed the slow start to not having played since Thursday evening. “We had two days off and it takes some time to get that rhythm back,” said Jones.

Kevin Love sat out the game in what Blatt described as simply a chance for the power forward to rest. Love has had back issues of late, but Blatt said that the appearance of fatigue was more connected to the decision.

Cleveland goes for a sweep of their four-game road trip on Monday night when they travel to Miami to take on a Heat team that defeated them on Christmas Day. That game began a three-week tale of woes for the Cavaliers which led to changes that has turned the season around.