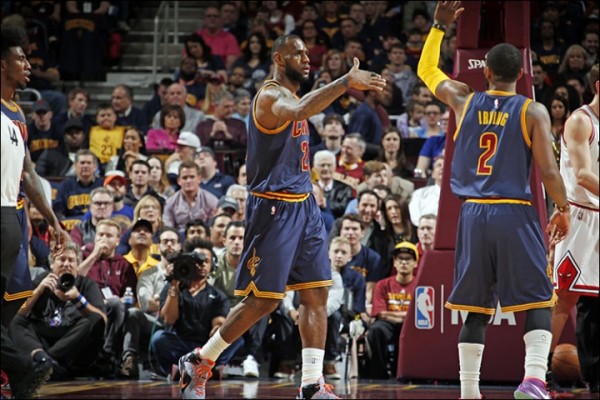 (Cleveland, OH) – The Cleveland Cavaliers (50-27) defeated the Chicago Bulls (46-31) on Sunday afternoon to extend their home win streak to 18 games.

The win gives the Cavs a four-game lead over the Bulls in the Eastern Conference standings and, with only five games remaining, likely the two seed in the conference.

The game was an absolute highlight factory, with Kyrie Irving, LeBron James, and J.R. Smith all contributing SportsCenter top ten caliber plays throughout the 48 minutes, including an unbelievable amount of buzzer beaters and half-court shots.

The Cavs came into the game looking to bomb from deep, setting the tone for what would become an exhilarating long distance give and take from both teams. The Cavs shot a preposterous 37 three-pointers (17 from J.R.) connecting on 16 of them (43.2%), while the Bulls shot 27 and connected on 11 (40.7%).

“I’ve been doing this a long time, I’ve never seen that,” coach David Blatt said after the win.

It was also a rugged game, fought between two teams who expect to see each other in the second round. There was a lot of trash talking, and extra contact after the whistle.

The first quarter tipped off and the Bulls took an early lead behind the stellar play of Mike Dunleavy who led Chicago with nine points. The Cavs responded with the offensive combo of Irving and Smith, who scored a combined 16 points, while shooting 4-5 from behind the arc.

The Cleveland duo continued to pile on the pressure in the second quarter behind a blitzkrieg from beyond the arc, shooting a combined 5-6 from three-point range. If you’re keeping track, that’s 9-11 from beyond the arc, ironically the same number the Bulls were calling looking for defensive help.

Coming out of the halftime break, the Bulls adjusted well on the defensive end and made the Cavs work for their shots. The Bulls held the Cavs to 31% shooting in the third quarter, while shooting 56% on the offensive end. Pau Gasol led the Bulls’ resurgence, going to work on the smaller Tristan Thompson in the post, scoring six points on 3-4 shooting.

In a surprise turn of events, the Cavs reverted to their starting lineup to close out the game. The Bulls made a run to close the gap to six points, but a dagger from Kevin Love with just over a minute to go (assisted by best-friend LeBron James) extended the lead to nine and sealed the game.

Despite the loss, Bulls Center Joakim Noah hopes to see the Cavs in the postseason.

“We’re confident…It would be really, really exciting. I hope it happens,” Noah told reporters after the loss.

With a 3-1-season advantage over the Bulls (the one loss coming in the absence of Love), the Cavs would also love to see Chicago in the second round.

The win gives the Cavs some breathing room in the Eastern Conference heading into the playoffs. The team has likely locked up the two seed and doesn’t have much else to gain in five upcoming games.

Coaches usually take this time to rest their starters for the postseason or fine tune some concepts to get the team ready for the playoffs. Blatt’s quotes over the last few games indicate that he will be focused on the latter.

“I think we’ve got some things left in the bag still,” Blatt told reporters after the game.

LeBron echoed this point after the game as well. James told reporters that he likes where the team is at, but “we still make some young team mistakes.”

Whether it’s some lineup changes, or maybe adding some new wrinkles to the offense, the Cavs have some time to iron out the wrinkles and gear up for what promises to be an exciting month of April.