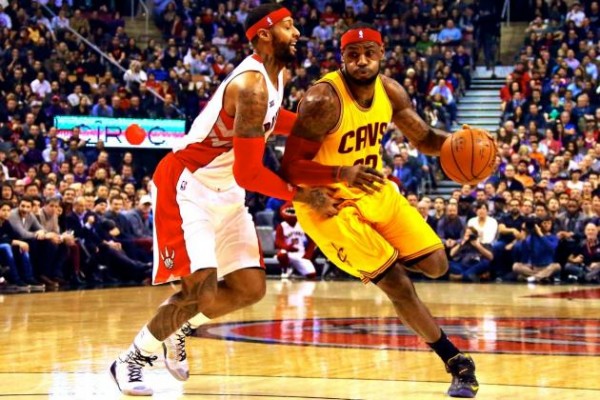 (Toronto, ON) — The Cleveland Cavaliers (38-24) are taking the show on the road Wednesday night when they face off against the Toronto Raptors (38-22) at the Air Canada Centre.

The Cavs are coming off a biblical beat down of the Boston Celtics, 110-79. The game was competitive for all of about five minutes before LeBron James flipped on the switch and put the game out of reach by the end of the first quarter.

How bad was it? Mike Miller, Joe Harris, and Kendrick Perkins all received extended playing time. That’s how bad.

It was a dominant effort from LeBron who nearly matched all the Celtics starters in the first half — 21 points to the Celtics’ combined 23. No matter who was guarding him, there was no spot on the floor that LeBron couldn’t hit from.

While LeBron led the way, the rest of the Cavs contributed a balanced offensive effort, as seven players scored in double digits. James made sure to mention his team’s diverse attack after the emphatic win.

“It’s great to know that you can go to different styles, different games, however the game dictates itself, to be able to approach it and be successful,” LeBron said.

The commanding performance was especially valuable for the starting five, who was able to rest the entire fourth quarter on the first night of a back-to-back with the game decided early.

With only twenty games left in the season, the Cavs are focusing on fine-tuning for the playoffs.

Farther north, the Raptors are reeling after their five-game losing streak was capped off by an embarrassing loss to the New York Knicks without Carmelo Anthony. The Raptors rebounded with a win against the Philadelphia 76ers, but will face a far greater test in the revamped Cavaliers.

1. Don’t Give up a Career Night

The truth of the matter is the Raptors, as talented as they are, simply don’t have the horses to keep up with the Cavs for 48 minutes. This can change quickly if the Cavs don’t bring their “A-Game,” see the Lou Williams game for proof. The team needs to show up ready to play a full game or the Raptors will make them pay.

Between Jonas Valanciunas and Amir Johnson, the Raptors possess a physical frontline that can bang in the paint. While the Toronto duo is a gritty one, it can’t match the size or overall skill of Timofey Mozgov and Kevin Love. It will be important for the Cavs to attack this matchup early and often.