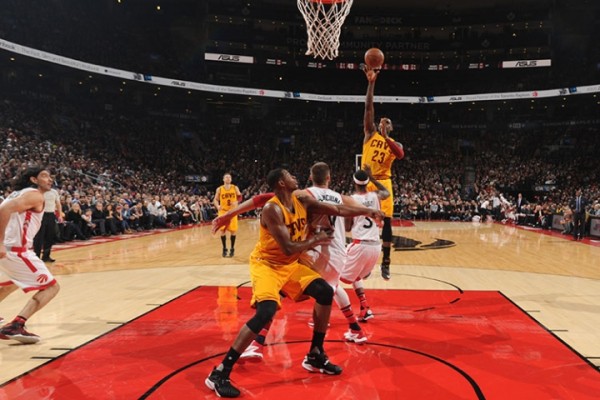 (Toronto, ON) – Kyle Lowry’s jumper with 3.9 seconds left completed a crushing late-game slide by the Cleveland Cavaliers that left them on the short end of a 99-97 decision at the Air Canada Centre on Friday night.

Toronto then tied it back up and J.R. Smith’s miss on a three-point attempt gave Toronto the ball back with 27.9 seconds to go, leading to the game-winner by Lowry, who finished with a game-high 43 points. A three-point attempt by LeBron James at the buzzer fell far short to drop the Cavs to 41-16 on the year.

In postgame comments, James spoke about how the game was lost:

“We gave up back-to-back threes and were just unfocused,” James said. “When you lose the way we did, just mental mistake after mental mistake, those hurt more than anything when you can play better mentally.”

Kyrie Irving also chimed in with his thoughts on the late-game issues:

“I just think down the stretch, our continuity just wasn’t there,” Irving said.

James led Cleveland with 25 points, eight rebounds and seven assists, followed by Love with 20 points and nine rebounds. Smith and Irving also scored in double figures with 13 and 10 points, respectively, while Tristan Thompson paced the rebounding with 10 on the evening.

Cavaliers head coach Tyronn Lue spoke after the game about how Lowry was able to dominate the game:

“He just kept attacking downhill,” Lue said. “Down the stretch, he took over the game.”

The Cavaliers bookended strong runs at the start and end of the opening quarter, scoring the game’s first seven points and then going on a 14-4 run in the final 3:49 of the period to hold a 31-21 lead. During those opening 12 minutes, Cleveland hit on 57 percent of their shot attempts.

In the second quarter, the Cavaliers allowed the Raptors to hit their first 10 shots, primarily because all but one of them were either layups or dunks. In contrast, the Cavs connected on just three of their first 12 field goal attempts. The end result was that Toronto went on a 20-6 run to take their first lead of the game at 41-39. However, in the final 1:09, Cleveland scored six of the final eight points for a 49-45 lead.

During the third quarter, the Cavs started off with an 11-4 run within the first four minutes, then used an 11-3 run later in the period to take their largest lead at 71-57 with 3:59 to go. Toronto then began a 17-6 run that extended into the fourth quarter to slice the margin to just three at 77-74.

Smith spoke about the impact of the defeat:

“It was a tough loss because this was a game we wanted,” Smith said. “We just have to put it behind us.”

The Cavaliers will stay on the road for a Sunday afternoon matchup against the Washington Wizards, with tipoff scheduled for just after 1 p.m. ET.