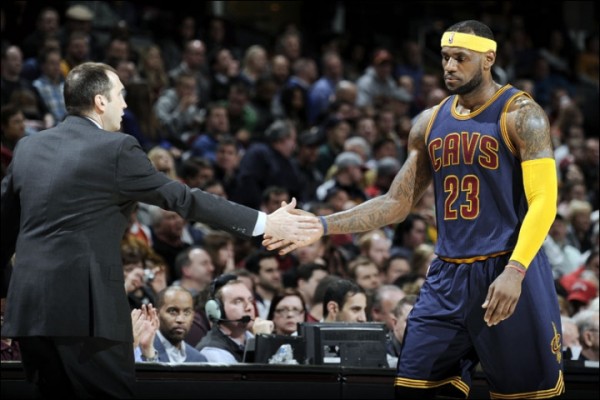 (Cleveland, OH) – In an absolutely dominating effort on both offense and defense, the Cleveland Cavaliers (38-24) stream rolled the Boston Celtics (23-35) en route to a 110-79 victory on Tuesday night at Quicken Loans Arena.

The Cavs, who led by as many as 44 points early in the fourth, outscored the Celtics by double digits in each of the first three quarters.

“This is the most fun I have had since being in the NBA,” said J.R. Smith (12 points and four rebounds) after the game. “We have an unbelievable core group who believe in one another.”

LeBron James was magnificent yet again for the Cavs, as he racked up 27 points, five assists and three steals in only 26 minutes of action. The Akron native also set history tonight, when he moved ahead of Ray Allen (24,505) to 21st on the NBA’s all-time scoring list.

“That’s one of my best friends. That’s a guy I competed against and grew up watching,” said LeBron with praise of Allen. “At the end to be able to team up with him the last two years over in Miami, I learned so much from him about work ethic and being a professional. To know that I passed him tonight is very humbling.”

After a layup with 7:49 remaining in the third quarter, LeBron passed his former Miami Heat teammate.

On a night where the defense held the Celtics to just 35% shooting, the Cleveland offense maintained a balanced attack as all five Cavs starters scored in double figures. Kyrie Irving had 18 points, five assists and two steals in 26 minutes, while Kevin Love added 12 points, eight rebounds and three steals in only 25 minutes on the floor.

Irving, who was inactive the past two games due to a strained left shoulder, looked like he didn’t miss a step during Tuesday night’s game.

“We’re trying to get there, from every necessary step that we needed to take and every game that we play from this point on,” said Irving. “We have another big game tomorrow with four games in five nights. I felt pretty good, but guys were making it easy for me to get into the open.”

Off the bench, the Cavs had James Jones and Tristan Thompson both score in double figures with 10 points on the night. Jones added six rebounds and sank two three pointers, while Thompson was a perfect four of four from the field to go along with seven boards.

It was an all-around rough evening for the Celtics, who have been playing pretty solid basketball as of late. Only two players for Boston managed to score in double figures, as center Brandon Bass led the team with 15 points and five rebounds.

Point guard Isaiah Thomas, who played in only his sixth game since being traded over to the Celtics from the Phoenix Suns, added 11 points. A former Ohio State University Buckeye, shooting guard Evan Turner, dished out seven assists as well as six points.

Up next, the Cavs will travel to Canada to take on the Toronto Raptors (38-22), who currently possess the second seed in the Eastern Conference, on Wednesday night at the Air Canada Centre. The game is scheduled to tip off shortly after 7:30 pm ET.