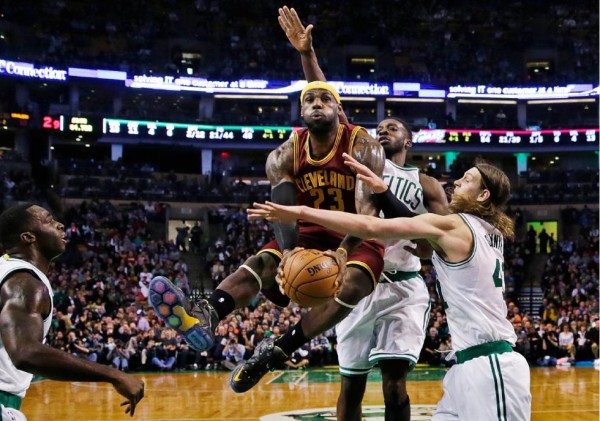 (Cleveland, OH) – Despite their first losing streak in almost two months, the Cleveland Cavaliers (37-24) have a golden opportunity to avenge back-to-back losses when they take on the Boston Celtics (23-34) on Tuesday night at Quicken Loans Arena. With the game scheduled to tip off shortly after 7 pm ET, the Cavs must defend home court to secure their 12th straight home victory.

“We’ve gotta get back to the winning ways, obviously,” said LeBron James on the Cavs’ matchup with the Celtics. “We’ve dropped two in a row and we’ve got to play well versus a team that can score the ball as of late, as good as any team in the league.”

After an impressive 110-99 victory over the Golden State Warriors on February 26th, the Cavs’ 18th win in their last 20 games, Kyrie Irving was diagnosed with a left shoulder strain that caused him to miss Cleveland’s next two road games against the Indiana Pacers and Houston Rockets. The All-Star point guard’s presence was surely missed, while his status for tonight’s game against Boston remains questionable.

Kyrie Irving participated in shootaround. He’ll be a game-time decision for the Boston game.

LeBron, who was inactive (sore back) with Irving during the Cavs’ 93-86 loss to the Pacers last Friday, returned in Sunday’s showdown with the Rockets. Although he posted 37 points on the afternoon, LeBron and the Cavs lost their duel, 105-103 in overtime, to All-Star shooting guard James Harden and the Rockets, who improved to 41-18 on the season.

While his scoring numbers have been excellent, LeBron’s free-throw shooting since the All-Star break has been downright cringeworthy. In his last five games played, he’s shot an abysmal 21 of 40 from the charity stripe, including a three of 11 performance against the Rockets in a two-point loss.

“I just didn’t have a rhythm. There is no excuse. I missed free throws,” said LeBron. “I missed the two biggest ones of the game to put us up with seconds on the clock and I didn’t come through. I failed my teammates.”

Tristan Thompson will look to build on an impressive performance he put together against the Rockets, when he recorded a season-high 19 rebounds to go along with 14 points off the bench.

The Celtics, who are fresh off a 106-101 loss to the Warriors on Sunday night, blew a 26-point second quarter lead in the game. After a defeat like that, they have every reason to put forth a more complete effort against the Cavs tonight.

Isaiah Thomas, who continues to be a bright spot for the Celtics, is averaging 21.8 points and 5.8 assists in five games since coming over from the Phoenix Suns before the trade deadline. Boston center Tyler Zeller, who played his first two seasons for Cleveland from 2012-2014, will return to Quicken Loans Arena as he is averaging 9.9 points and 5.6 rebounds per game this season.

Two former Ohio State University Buckeyes, shooting guard Evan Turner and power forward Jared Sullinger, make their return to Ohio as well. Turner will start at shooting guard for the Celtics, while Sullinger was unfortunately lost for the season last month due to a stress fracture in his left foot.