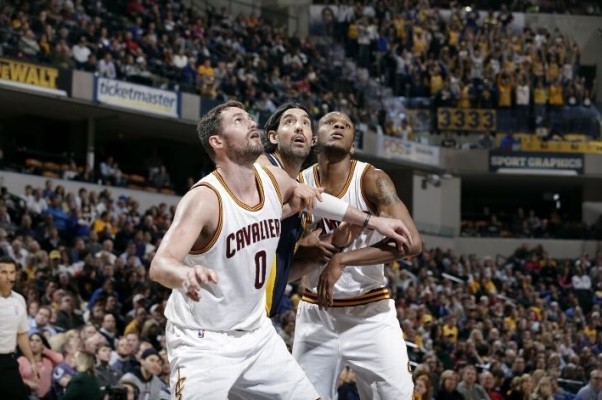 (Indianapolis, IN) – A late comeback fell short for the Cleveland Cavaliers as they dropped a 93-86 road decision to the Indiana Pacers at Bankers Life Field House on Friday night.

Cleveland was playing without Kyrie Irving and LeBron James, which made it tough for the Cavaliers before the game started. Irving was ruled out earlier Friday after sustaining a shoulder injury in the Thursday night win over the Golden State Warriors. James also appeared to have some back troubles on Thursday, but his absence was simply indicated as a coach’s decision, which can be translated as an opportunity to rest.

Trailing 85-70 with just under five minutes left in the game, the Cavs ran off 11 straight points in just over three minutes to make it 85-81 with 1:35 left. Each team then connected on a three, and after another Pacer basket, Matthew Dellavedova’s two free throws with 32.5 seconds left made it 90-86. However, three free throws from George Hill put the game away for Indiana.

Dellavedova said about the late push, “They hit some big shots down the stretch, and we had some good looks that didn’t fall.” Asked if there was anything positive about the late comeback, he dismissed such thinking by saying, “It still counts as a loss. If you put all that effort in, you want to win.”

Despite the absence of James and Irving, the Cavaliers got off to a fast start by scoring the first seven points of the game. They eventually boosted the margin to 13 at 21-8, with J.R. Smith closing out that push with his third three-pointer in the first six minutes.

At that point, the team’s torrid early shooting quickly turned to ice as Indiana got back in the game with an 11-3 run to slice their deficit to just four at 23-19. The lone field goal by the Cavs during a five minute stretch was from Tristan Thompson. However, five unanswered points to close out the quarter by Cleveland gave them a 28-19 advantage.

In the second quarter, some more frigid shooting for the first six minutes helped Indiana take its first lead of the game. The lone field goal during that stretch was a Kevin Love hook shot with 9:19 left.

Timofey Mozgov’s jumper with just under four minutes to go made it 42-39 in favor of the Cavaliers, but a 12-3 run for the Pacers leading up to halftime gave them a 51-46 lead at the intermission.

The trio of Smith, Love and Dellavedova combined for 31 first half points. However, the latter two struggled from the outside, connecting on just seven of their 24 attempts during the opening two quarters.

Continued cold shooting by Cleveland in the third quarter helped increase the team’s deficit into double figures, with Iman Shumpert the lone player to score on a field goal in the last nine minutes of the stanza.

Shumpert connected five times, but his first and last during that stretch gave an indication of the Cavaliers’ struggles. His first got the Cavs within four at 57-53, while the latter made it 74-61 Indiana with 1:05 to play in the quarter to close out the scoring for the third period. The 17-6 Pacer run proved to be the difference in the game.

The field goal shooting for the first three quarters can be broken down this way: the Cavaliers hit eight of their first 13 shots, then made only 16 of their next 54 attempts. The latter percentage comes in at just under 30 percent.

Love talked about his rough 6-for-19 shooting performance by noting, “We gave ourselves good looks, but the shots just didn’t fall.” His assessment of the late comeback was an attempt to put it behind him by saying, “We felt like we could have won the game. We’re not going to hang our heads.”

In the fourth quarter, Cleveland scored eight of the first 10 points and had a chance to reduce the margin to four. However, a bad pass by Shumpert was quickly converted by Indiana, which tacked on five additional unanswered points to make the score 83-70 with 5:46 left. Soon after, the Cavaliers began their ill-fated comeback.

Smith led Cleveland with 21 points, while the trio of Love, Dellavedova and Shumpert each collected a double-double on the evening.

Asked if not playing James was costly to the team, Cavs Head Coach David Blatt said, “We showed up ready to play. We started the game very well.”

Assessing where things went wrong, Blatt said, “We needed to make open shots over the top. We didn’t shoot well from the Three (pointer).” He gave credit to the Pacers, saying, “Indiana played well down the stretch and got the win.”

James and Irving will travel with the team to Houston for their nationally televised game on Sunday afternoon against the Rockets. However, their status won’t be known until it gets closer to tipoff, which is set for just after 3:30 p.m. ET.