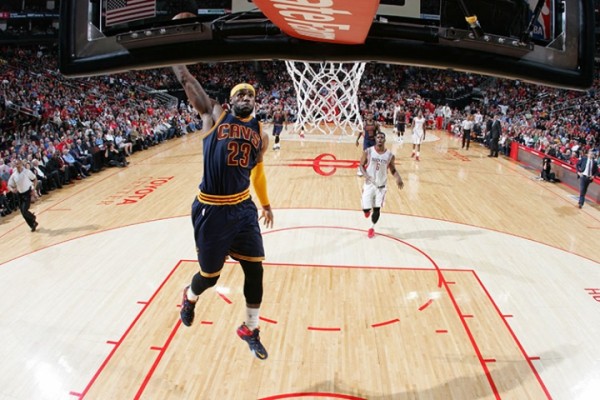 (Houston, TX) – Two missed free throws by LeBron James with 4.2 seconds remaining in overtime proved to be fatal for the Cleveland Cavaliers as they dropped a 105-103 road decision to the Houston Rockets at the Toyota Center on Sunday afternoon.

James, who struggled at the charity stripe all game by missing eight of his 11 attempts, had driven to the basket and was fouled by the Rockets’ Josh Smith. However, both efforts came up short, and after James Harden then split a pair of free throws with 1.5 seconds left, a last-ditch effort failed with 0.3 seconds left to saddle the Cavs with their second straight loss.

Earlier in the extra session, Houston held a 104-100 advantage at the 2:21 mark, but a three from James with 43.5 seconds left put the team in position for a potential win that never came to pass.

The Cavaliers had trailed 82-74 at the start of the fourth quarter when James Jones sandwiched a pair of threes between a Tristan Thompson putback to tie the score at 82 in the first 88 seconds of action. However, that momentum was blunted when the Rockets quickly connected on their own pair of threes to boost the lead back up to six.

Cleveland then chipped away at the deficit, and eventually held a three-point lead at 95-92 with 3:15 to play in regulation. Houston then countered with six straight points that seemed to put them in prime position to clinch the game, but a missed free throw by Harden was followed soon after by James getting fouled.

James split two free throws, and was followed by Thompson connecting on a pair of free throws with 1:09 left to tie the game at 98. Houston turned the ball over, but the Cavs’ four attempts at winning it also came up empty, the final effort coming on a James step-back jumper in the closing seconds.

Despite the loss, Thompson proved to be a force in the paint by hauling down a season-high 19 rebounds to go along with his 14 points. He commented after the game, “We had two chances in regulation and overtime to win the game. That’s on us. We gave them the game. They didn’t take it from us.”

The Cavaliers were once again without the services of point guard Kyrie Irving, who sat out his second straight game with a shoulder injury suffered in the Thursday night win against the Golden State Warriors. His absence was keenly felt, with the starting backcourt of Matthew Dellavedova and J.R. Smith managing just four field goals in 17 attempts.

At the outset, the first quarter saw a series of back-and-forth runs in which one team took control, only to be matched by their opponent. The Cavs began with an 11-5 start, but the Rockets answered with a 15-4 run to make it 20-15 with 3:47 left. Cleveland answered with seven unanswered points, but Houston closed out the quarter with a 9-2 run, including the last seven points to make it 29-26.

In the second, James scored nine points in the first five minutes of the quarter, as the Cavaliers were able to put together a 14-3 run for a 40-34 advantage. However, once again, Houston answered with six consecutive points.

After Thompson’s reverse layup with just under six minutes left before intermission gave the Cavs a 42-40 lead, they managed only two Kevin Love field goals and an Iman Shumpert free throw the rest of the way to trail by three, 50-47, at the break.

When play resumed, the Rockets scored the first seven points to take a 10-point lead, and with the score 57-49 and 9:31 left in the quarter, James drove to the basket and was fouled.

Houston’s Patrick Beverly was called for blocking, but just after the play, a brief scuffle between James and Beverly ensued, resulting in a brief official’s timeout. Both players were assessed technical fouls, but Beverly answered with seven quick points over the next few minutes to give the Rockets a 63-52 lead.

The contentious play continued when Houston’s Trevor Ariza and Timofey Mozgov jawed briefly, with Ariza then being whistled for a technical. Later in the quarter, James was called for a foul on Harden, who then kicked James in the groin. Harden was called for a flagrant foul, while Thompson and the Rockets’ Corey Brewer were whistled for technicals.

Cleveland was reportedly told by referees at the time that if the kick had been intentional, it would have been a flagrant-two foul, which would have resulted in an immediate ejection.

James discussed the Harden controversy by saying, “It’s not a basketball play. The league will probably take a look at it. I have no idea why he would do that.”

A pair of threes from Love kept the Cavaliers in contention, but Houston still managed to maintain a lead of either double-digits or close to it for the rest of the quarter. As the horn sounded at the end of the third, Cleveland trailed by eight at 82-74.

The Cavaliers now return home on Tuesday night for a 7 p.m. ET matchup against the Boston Celtics, the start of a four-game-in-five-night stretch.