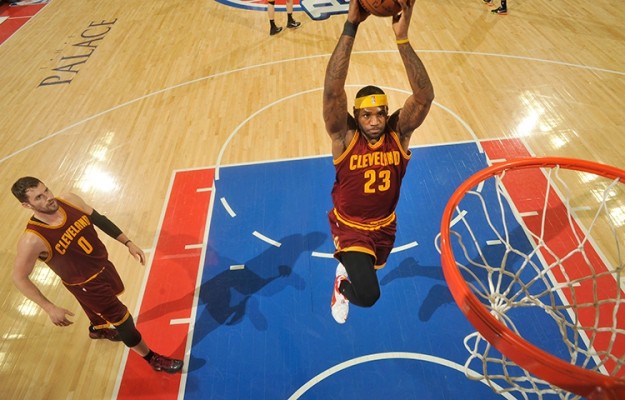 (Detroit, MI) – After being down by as many as 14 points in the third quarter on Tuesday night at The Palace of Auburn Hills, the Cleveland Cavaliers (36-22) rallied past the Detroit Pistons (23-34) by a score of 102-93 for their third straight win and 17th victory in 19 games.

After the Pistons opened up an early 14-point third quarter lead, the Cavs went on a furious 43-16 run into the fourth quarter, good enough to stretch Cleveland’s lead to 96-83 with 2:33 remaining in the game.

“We just decided to wake up and start playing the game the way we have been playing for several weeks now.” said Cavaliers head coach David Blatt after the game. “We just got gritty and then we got greedy on defense, which is not a bad thing. Our guys really laid it out there at that end of the floor.”

LeBron James, who obviously has already made a name for himself as a legendary NBA player, added yet another record to his repertoire as he passed Scottie Pippen for the most assists all-time by a forward. James’ alley-oop to Timofey Mozgov with 9:10 left in the second quarter gave him four assists on the night and 6,136 for his career, good enough to pass Pippen’s mark of 6,135.

James also scored 19 points to go along with his 11 assists, seven rebounds and three steals but unfortunately, he also turned the ball over a cringeworthy nine times on Tuesday night.

“It means way more than it did passing Allen Iverson in scoring,” said James on the assists record for forwards. “It took a lot of pride and I get more of a rush seeing my teammates succeed more than myself.”

On defense, Cleveland was absolutely magnificent in the second half. After the Pistons scored 35 points in the second quarter to lead the Cavs 62-53 at halftime, Cleveland held Detroit to just 31 total points combined in the third and fourth quarter.

“They came back out with a great mindset on the defensive end,” said veteran center Kendrick Perkins, who was just recently added to the Cavaliers roster. “The sky is the limit, we’ve got to keep building and take things one game at a time.”

With one of his better shooting nights on the year, Kevin Love drained eight of his 13 three-point attempts to lead his team in scoring with 24 points. He was also very active on the glass against Detroit, tallying nine rebounds to go with his three assists. Kyrie Irving and Mozgov were also solid contributors on the night, tallying 18 and 14 points respectively, while Irving had five assists and Mozgov recorded an impressive four blocks.

For the Pistons, the guard tandem of Reggie Jackson and Kentavious Caldwell-Pope combined to score 43 points, while Jackson led his team in assists with nine. Detroit center Andre Drummond (17 points and 10 rebounds) and power forward Greg Monroe (12 points and 14 rebounds) both posted double-doubles on the night.

Up next on their slate, the Cavs will take on the Golden State Warriors (44-10), who currently possess the best record in the entire NBA. A possible 2014-2015 NBA Finals matchup, the game is scheduled to tip off Thursday night shortly after 8:00 pm ET and will be broadcast nationally on TNT.