Don't Miss
Home / Editorials / Perks of the Job: What Kendrick Perkins Brings to the Cleveland Cavaliers

Perks of the Job: What Kendrick Perkins Brings to the Cleveland Cavaliers 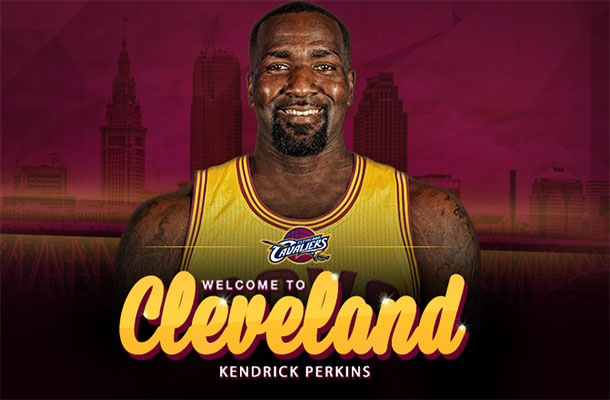 This year’s trade deadline was a monumental one. Once the clock struck 3 pm on February 19 and the deadline day dust had settled, roughly nine percent of the NBA had been sent to new digs. Nearly half of the NBA’s thirty teams took part in the trade madness; however, one of the league’s hottest teams, the Cleveland Cavaliers, calmly took to the sidelines as the drama unfolded; for David Griffin had other plans.

The Cavaliers’ GM had instead circled another day on his calendar, February 20th, the day in which several players who were traded the day prior were set to be bought out by their new teams.

Although Griffin had effectively turned the Cavs’ season around when he traded for J.R. Smith, Iman Shumpert and Timofey Mozgov the month prior, there were still roster holes yet unfilled; and with an open spot at the end of the bench, Griff was determined to make one last move.

Along came Kendrick Perkins. With the Cavaliers’ two biggest areas of need being depth at both the point guard and center positions, Griffin may have very well found the last piece of the Cavaliers’ puzzle. The eleven-year veteran is a welcomed addition that will effectively fill some of the squad’s largest remaining holes.

Let’s start with the obvious.

Although the 2014-15 Cleveland Cavaliers possess a star-studded roster with plenty of natural talent and ability, one luxury they do not enjoy is depth down low. The arrival of Mozgov has been a monumental one. Since coming onto the team, “T-Mo” has anchored a new-look defense that has helped propel the team from a dumper-dweller defensive team to one that actually instills fear in its opponents.

With only three viable bigs prior to the Perkins acquisition (Mozgov, Kevin Love and Tristan Thompson), depth has indeed been an issue. When facing the Chicago Bulls just before the All-Star break, the team was without Love, and the lack of depth showed. The Bulls’ strong frontcourt bullied their wine and gold counterparts and carried the team to a decisive 113-98 victory on their home floor.

Evidently, this is something that Griffin & Co. will not allow to be replicated come playoff time. Should one of the three aforementioned players go down injured, the team’s title chances may very well go down with them.

This is where Perkins comes in. Should one of his frontcourt mates come up lame, Perk will be there to fill his shoes. Should Mozgov find himself in foul trouble early on in a vital playoff game, Perk will be waiting in the wings, ready to step up and ply his trade. He effectively provides the Cavaliers with a fourth big, giving them both insurance and options down low.

Which brings me to my next point…

For much of the season, Tristan Thompson has been deployed out of his natural position and has often been called upon to become the team’s center. While he has filled that role ever-so-valiantly, the arrival of Perkins gives David Blatt the flexibility to use Thompson in new ways.

Because of the previous lack of depth, it was nearly impossible to play both Mozgov and Thompson on the court at the same time because there was no center waiting on the sidelines to dispel one or the other for some rest. The two were played almost exclusively apart from each other, with either Love, LeBron James or Shawn Marion lining up alongside them at the four.

Now that Blatt has four bigs at his disposal, his ability to tinker with lineups has grown almost exponentially. Should he feel the need to go for a more defensive-oriented lineup, he can bring Love to the bench and throw out Thompson alongside either Mozgov or Perkins. If he wants to play with more offensive firepower, he can trot out the standard Love/Mozgov one-two punch. Small-ball? Lineup Thompson at center and throw out LeBron or Marion at the four and run for days.

We have seen how adaptive and open-minded Blatt can be at times, so giving him the opportunity to have greater flexibility down low could effectively turn the tables against frontcourt-heavy teams like Chicago or the Washington Wizards. No longer will the Cavs be pushed around because of a lack of depth.

If there is one thing Perkins is known for, it’s defense. The man has been the defensive anchor for (wait for it) three Finals teams. Sure, he may not be the most polished offensive center around (the words offense and Perkins hardly even go together), but the new-look Cavs have no shortcomings when it comes to their offensive game.

Some might argue that with Perkins on the floor, his team is effectively playing four-on-five on the offensive side of the ball; but with guys like Kyrie Irving, Love and James lining up alongside him, I would hardly call that a disadvantage.

Perkins thrives on doing the little, less glorious things on the basketball court, and with the star-power of the aforementioned players, that attribute could prove to be a godsend. He is a tremendous screener, something the Cavs currently do not possess. The man can set a pick that sends the chasing defender to his backside.

Not only that, but he is terrific at boxing out. Put Thompson or Love, two of the league’s premier rebounders, alongside him and they’ll have a field day, hauling in boards left, right and center. His presence will be a welcome one in the Cavaliers locker room.

It’s no secret, Perkins is one mean motherlover. His scowl has become a thing of legend. The man cracks a smile about as often as the San Antonio Spurs get a new coach and his play on the court reflects that I-don’t-take-no-bs demeanor.

Perkins is not afraid to put an opponent flat on his rear-end. He personifies the term “enforcer” — a gritty big-man who causes opposing players to think twice before entering his paint. This trait is yet another that will be welcome with open arms within the Cavaliers’ locker room.

Picture this: Eastern Conference Finals, Cavs vs. Bulls – Irving attacks the basket on a crucial possession late in the fourth of a vital do-or-die game, only to have resident “bad-boy” Joakim Noah step in front of him and lay down a hard foul. Think of what would happen with the team as it currently stands. Now picture what might go down with Perk on the court. To put it lightly, that *bleep* wouldn’t fly. Now that is what Kendrick Perkins is all about – toughness.

Aside from the aforementioned insurance, roster flexibility, defense and toughness, what Perkins brings to the table is a championship pedigree and a willingness to get down in the mud and do the dirty work. He’s a cheap, commanding presence who helps fill one of the Cavs’ most immediate needs in more ways than one.

Critics may be quick to point out his seemingly diminishing on-court productivity, but the fact-of-the-matter is that Perk was simply asked to do too much during his time with the Oklahoma City Thunder.

What he will do is inject this team with a sense of what it takes to win. He’ll commit the sometimes-necessary hard foul. He’ll block the occasional shot. He’ll stand up for his teammates. When it boils down to it, in the eighth or ninth man on the roster and fourth big in the rotation, what more could you possibly want?

Kendrick Perkins is just another piece of evidence that the future is bright for the Cleveland Cavaliers. He may not be the big-name acquisition Cavs fans want, but he is both the player Cleveland needs and the one it deserves. Well…apart from that LeBron James guy.