Kyrie Irving vs. Derrick Rose: Who was the better point guard at age 22? 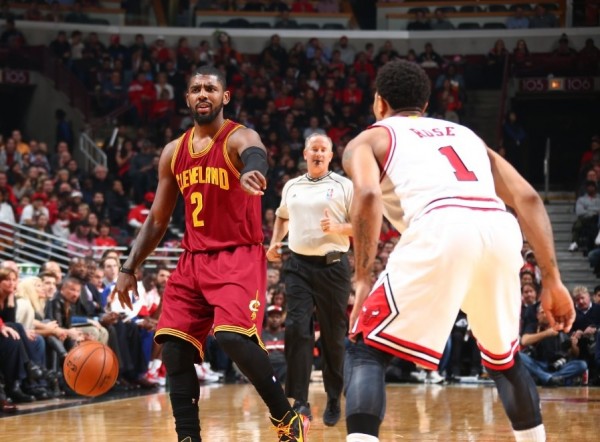 One of the key matchups in Thursday night’s showdown between the Cleveland Cavaliers and Chicago Bulls will be at the point guard slot with Kyrie Irving facing off against Derrick Rose. The two former top picks in the NBA Draft haven’t quite been able to establish a classic rivalry yet, but with both teams now bringing solid lineups to the court, that possibility could be in the making.

The two have both made their mark on an individual basis since entering the NBA, but with three years separating them, looking at their overall numbers won’t provide the proper analysis in determining which one’s better. That means that the only way to gauge this issue is to compare what each player had accomplished by age 22.

One of the odd differences between the two players is the fact that Rose’s first three years were injury-free, while Irving’s saw a number of mishaps occur, resulting in his missing 49 games. However, Rose’s injury problems then began, while Irving has only sat out three games in his fourth year.

Also, the two situations in which each player walked into were decidedly different: Rose joined a mediocre Bulls team that was able to improve eight games during his first year.

In contrast, Irving was immediately cast into the role of savior after the Cavs’ first post-LeBron year saw them finish 19-63. The two additional wins they collected in Irving’s first year are also misleading, since they came in a 66-game lockout-shortened season, one in which he missed 15 games.

Thus, to get a fair assessment of the two, per-game averages will be the determining factor in deciding which one was better, rather than simply focusing on the overall numbers, which skew decidedly (in some cases) toward Rose.

Points per game does give a slight edge to Rose, but that stems from his fantastic third season that resulted in him becoming the youngest Most Valuable Player winner in NBA history. In his first two seasons, Irving has a two-point-per-game advantage in each year, while last year, Irving “only” averaged 20.8 per game.

Some comparisons of other parts of their game show that they know how to dish to their teammates for the assist, and both are capable of picking up the stray rebound during the course of a game. The numbers in both areas are effectively even, so they can be considered a wash in this outlook.

When it comes to three-point shooting, Irving wins hands down. That’s due in part to Rose averaging just under 31 percent from beyond the circle while Irving has connected at a nearly 39 percent clip. In his first two years, Rose was virtually non-existent in this category before showing strong improvement in year three. Still, Irving has been a long-range weapon from the first day he stepped on the court.

Effectiveness at the free throw line is too often an underrated asset, something Irving was (and still is) consistent with during his first three years, hitting at just under 86 percent. Rose was certainly no slouch at the charity stripe, but his numbers were somewhat inconsistent when compared to Irving in this area: 79, 77, 86 percent.

Irving has always been the more aggressive player between the two, with Rose’s injury woes over the past few years making that even more pronounced. Irving averaged more fouls during his first three years, but the payoff of more steals helped his overall game compare favorably to Rose’s first three seasons.

While the Bulls reaching the playoffs in each of Rose’s first three seasons would seemingly give him the overall edge, his fellow teammates had a large role in making that possible.

For example, Rose as a rookie had Ben Gordon, who was in last productive year, along with Luol Deng, Kirk Hinrich and a developing Joakim Noah. Meanwhile, Irving was joined in the starting lineup by Antawn Jamison and a cast of players like Alonzo Gee, Omri Casspi and Anthony Parker. Anderson Varejao missed much of that season due to injury.

Where they stand now:

Those numbers don’t even include Irving’s totals for this year, one in which he’s blossomed into an effective backcourt component of the Cavaliers’ revamped lineup. His 55-point effort against the Portland Trail Blazers on January 28, which included a pair of clutch three-pointers in the final minute, are a clear indication he’s taking his game to the next level.

Rose, on the other hand, has missed 11 games so far this year due to continuing injury issues. Perhaps even more damaging, he’s acquired an image of being soft or unwilling to play with even the minor aches and pains that all NBA players have. An unfair tag for an all-world talent, but one that may follow him in the years ahead.

Therefore, with Irving just over a month away from turning 23, the case has been made that he was the better point guard of the two at age 22.

Anderson Varejaocleveland cavaliersfeaturedkyrie irvingnews tickerPortland Trail Blazers
← Previous Story Why LeBron James Should Be at the Top of the MVP Conversation
Next Story → Season Rewind: An In-Depth Look at Blatt’s First Season as an NBA Coach