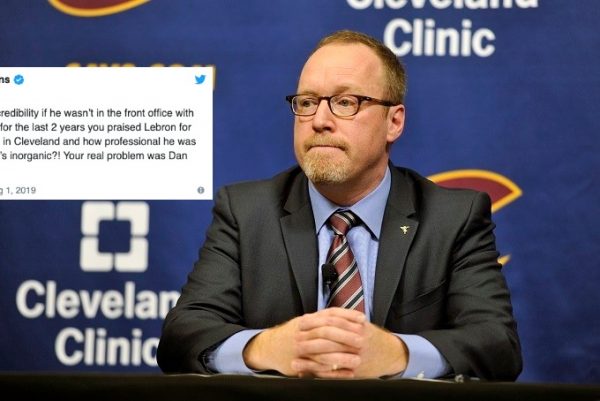 David Griffin has come under fire for his recent comments on LeBron James, resulting in one former Cleveland Cavaliers player taking a shot at him and Cavs majority owner Dan Gilbert.

Kendrick Perkins, who played for the Cavs with Griffin as the general manager during the 2014-15 season, lashed out at Griffin on Twitter and told him to redirect his venom toward Gilbert instead.

Would Griff have any credibility if he wasn’t in the front office with Lebron on team? Griff for the last 2 years you praised Lebron for buying into the Culture in Cleveland and how professional he was and now your saying it’s inorganic?! Your real problem was Dan Gilbert!!! ???

Sports Illustrated recently published a controversial piece on Griffin where he spoke about his time as the Cavs’ general manager. One thing that stood out to readers was how “miserable” he said he was during his tenure with the Cavs despite winning a championship in 2016 with the roster that he built.

Perkins’ comments were based on Griffin’s take on the culture within the Cavs organization.

Probably more controversial, however, was his take on James’ mindset following that championship season as he questioned the four-time MVP’s drive to win another title.

“There wasn’t a lot else for him,” Griffin said. “I don’t think he’s the same animal anymore about winning.”

ESPN, which gave further insight to the Sports Illustrated article, added fuel to the fire by saying that others believe James is concerned more about his family and future business endeavors than anything else.

“Many in the NBA now suggest James harbors two priorities: enduring to team with his eldest son, Bronny (LeBron James Jr.), and one day owning a franchise,” wrote Jake Fischer of Sports Illustrated.

ESPN’s sources say that Griffin and a representative for James have since spoken:

“Griffin and a person close to James spoke to each other after the SI story was published, sources told ESPN, and Griffin expressed that some context was missing behind his comments. James’ camp encouraged Griffin to clear up his stance on the record, sources said.”

Griffin and James have enjoyed a good relationship over the years, but the New Orleans Pelicans executive has a lot to answer for in the coming days.