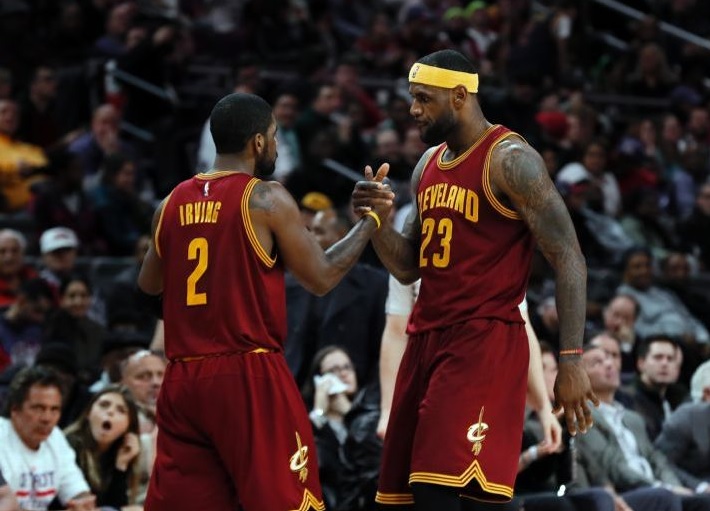 (Detroit, MI) – Although they had a horrible start on the offensive end, the Cleveland Cavaliers (26-20) outlasted the Detroit Pistons (17-29) by a score of 103-95 on Tuesday night at The Palace of Auburn Hills for their seventh straight victory.

LeBron James and Kyrie Irving stole the show as the two All-Stars combined to score 70 of the Cavs’ 103 total points on the night. Irving led the way for Cleveland with 38 points, six assists and three steals to accompany James’ 32 points, seven assists and six rebounds.

“Everyone is sharing the ball,” said Irving after the game. “That’s when we’re at our best, when we keep it moving.”

An eye-popping statistic for the Cavs on the night was that James and Irving were the only two Cleveland players to even attempt free throws in the game. As strange as it was, the two excelled at the line as they combined to sink 16 of their 17 free throw attempts together.

The duo took over the game in the fourth quarter to thwart any thought of a Pistons’ comeback victory. Tristan Thompson, who finished with 12 rebounds and four points for the Cavs off the bench, was the only other player besides James and Irving to score points in the fourth quarter for Cleveland. Since his return from knee and back injuries, James has averaged 30.5 points and 6.75 rebounds per game during the Cavs’ seven-game win streak.

Cavs fans had to hold their breath during the latter stages of the game, as James fell to the floor near the basket during the final seconds of the third quarter with a wrist injury. James went to the bench for a few minutes, but immediately returned in the fourth quarter.

In a game where many of the Cavs struggled on the offensive end, James and Irving stepped up and carried their team to another win. Shawn Marion, who recently announced he would retire at the end of the 2014-2015 season, was the Cavs’ next highest scorer with eight points (four shots made on five attempts from the floor) in only 19 minutes of action.

“Not saying it’s going to result in a win every night, but we’re starting to understand what it means to be a professional,” said James.

A trend that has continued for the Cavs has been aggressive, sound defense. Cleveland Cavaliers head coach David Blatt would be the first person to point that out in relation to the team’s recent success.

“We have our full team on the court with players that have the ability to defend,” said Blatt in his postgame interview.

The Pistons, who are currently the second-best team in the NBA in regards to team rebounds per game, gave everything they could in order to slow down the Cavs. Pistons center Andre Drummond and power forward Greg Monroe both had double-doubles on the night, with Drummond’s 12 points and 17 rebounds to go along with Monroe’s 17 points and 12 rebounds. A monster on the defensive end, Drummond finished the game with six of the Pistons’ eight blocked shots.

Six Pistons wound up in double figures compared to only two Cavs players, led by point guard D.J. Augustin’s 19 points and nine assists for Detroit. Augustin was thrust into his second straight start in place of Brandon Jennings due to a season-ending ruptured left achilles tendon. So far, Augustin has risen to the role to score a combined 53 points in his two starts for Jennings.

With the struggles of Kevin Love and J.R. Smith, the Cavs have a lot of work do to before their next stretch of games. Despite his eight rebounds and four assists, Love only shot three of 11 from the field for seven points. Smith had one of his worst games in a Cavs uniform as he scored only five points on two of 11 shots from the floor.

Up next on their schedule, the Cavs will return home to Quicken Loans Arena to take on an elite Western Conference foe in the Portland Trail Blazers (32-13) on Wednesday. The game is slated to tip off shortly after 7:00 pm ET.