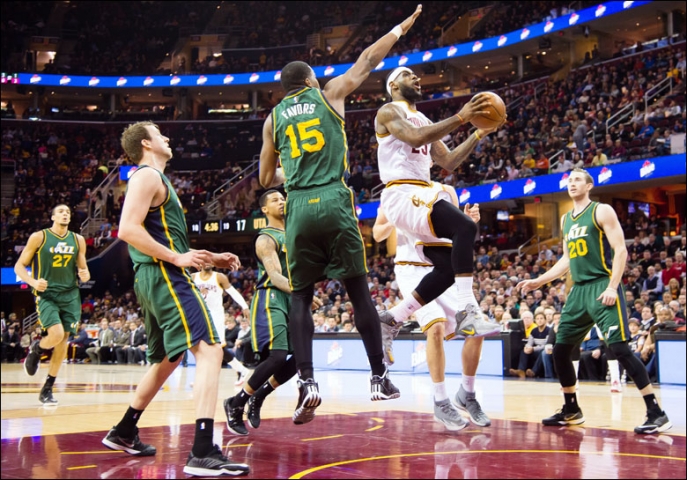 (Cleveland, OH) – The Cleveland Cavaliers held the Utah Jazz without a field goal for over eight minutes amid a 22-3 first-half run, helping them come away with a 106-92 victory on Wednesday night at Quicken Loans Arena.

The win avenged the heartbreaking 102-100 buzzer-beating loss the Cavs endured against Utah on November 5, and marked their fourth straight victory. All five Cleveland starters scored in double figures, led by LeBron James with 26.

Other scorers of note included Kevin Love and Timofey Mozgov who each collected double-doubles on the evening. Love contributed 19 points and 13 rebounds, while Mozgov added 16 points and 11 boards. The 16 points by Mozgov marked the largest scoring output in his seven games with the Cavaliers.

Kyrie Irving, who finished with 18 points, also was complimentary of Mozgov’s presence in the lineup, saying, “Having him in the paint is tough for any team to go against.”

James chimed with more praise of Mozgov saying, “He’s probably the best big guy I’ve played with since Z,” referring to former teammate Zydrunas Ilgauskas, and specifying that “big” was in reference to seven-footers.

James also added, “To have both of them (Mozgov and Love) both on the floor at the same time gives us so much space.”

The eight-minute surge began after James’ driving layup with 4:35 to play in the first quarter led to a three-point play to give the Cavs a 19-17 advantage. More importantly, it gave them the lead for good, with the Jazz managing just three free throws during the onslaught.

J.R. Smith’s three with 1:03 left then gave Cleveland its first double-digit lead of the contest at 31-19. The lone point scored in the final minute of the quarter came on a Utah free throw to give the Cavaliers an 11-point margin after one quarter of play.

The Cavs would notch the first seven points of the second stanza to boost the margin to 38-20 at the 9:20 mark of quarter number two, but the Jazz put together a 13-4 run of their own to briefly get back in the game to make it a 9-point contest with 5:14 left before halftime.

For the remainder of the half, Utah did most of the scoring, notching six of the final seven points to make it 53-40 in favor of the Cavs at the break.

During that first half, the Cavalier starters were almost exclusively responsible for all the scoring. The lone bench player to tally any points was veteran Shawn Marion with four points.

Whatever chance the Jazz had of chopping their deficit any further died in the first nine minutes of the third quarter, with Cleveland going on a 23-6 run to start the second half. That gave the Cavs a 76-48 lead, their biggest of the game.

At that point, Utah was able to whittle their deficit to 20 at 82-62 by the end of the quarter, needing a 14-6 run in the final three minutes just to do that.

In the final quarter, the Jazz were able to slice the margin down to 14 at 91-77 with 7:48 left, resulting in James returning to the game. However, Utah continued to chip away, reducing the deficit to 12 at 93-81 with 5:36 to go, but two quick baskets by the Cavaliers let their fans breathe a little easier.

While the Jazz again reduced the margin to 12 at 100-88 with 3:10 left, the Cavaliers scored six unanswered points over the next two minutes to finally put the furious rally to rest.

Blatt noted that the plan was to give James the fourth quarter off, but the comeback effort by the Jazz nixed that. “We weren’t going to risk the game, but he (James) organized things.”

James was succinct in explaining how the Cavs were able to come away with the win, saying, “Defensively, we stepped it up. Offensively, we were sharing the ball.”

When asked about the developing team chemistry, Blatt said, “We still have a ways to go, but it’s palpable. You feel the team is beginning to gel. (Before) We just didn’t have the bullets in the gun.”

Smith was asked in the postgame locker room about the improving Cleveland defensive effort, saying, “It’s very contagious.” He then spoke about the offensive side by saying, “We need to keep moving the ball like we have been.”

Irving’s take on the defense versus the Jazz was, “We had a lot of great defensive plays. We just need to be consistent game-to-game.”

On Friday, the Cavaliers’ four-game homestand continues when they host the Charlotte Hornets in a 7:30 pm ET matchup. Guard Iman Shumpert could make his Cavs’ debut in this matchup after missing the past six weeks due to a separated shoulder.