Don't Miss
Home / Videos / Video: LeBron James Discusses Why He and Kyrie Irving Have Been So Effective

Video: LeBron James Discusses Why He and Kyrie Irving Have Been So Effective 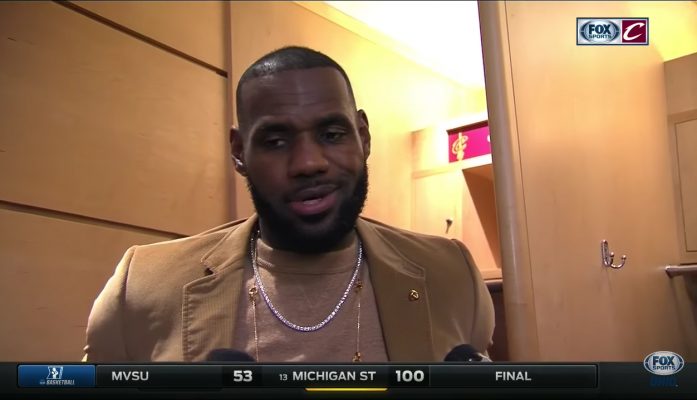 After 12 games into the 2016-17 NBA season, the Cleveland Cavaliers find themselves possessing a 10-2 record in the midst of defending the franchise’s first title. One of the reasons that the team continues to thrive is because of the success it’s had in running the pick-and-roll on the offensive side of the ball.

That success continued on Friday night in the Cavaliers’ 104-81 victory over the Detroit Pistons. LeBron James was asked after the game about how the pick-and-roll was able to work so well during the win and he gave full credit to teammate Kyrie Irving.

“Kyrie was our floor general tonight and he had seven assists in the first quarter. We just wanted to keep milking it,” James said. “The kid was making all the right passes and all the right plays, running the game, running the best way the team had to do tonight. That was just a byproduct of it, us playing a side pick-and-roll, a little middle pick-and-roll as well.”

James answered a number of questions pertaining to the victory, though his pick-and-roll comments begin approximately 30 seconds into the video.

.@KingJames and @KyrieIrving rediscovered a successful play from the @cavs' recent past.

It worked wonders on Friday. pic.twitter.com/XGPs6K6R8Y

The Cavs have begun a rare four-day break from action, with their next clash set for Wednesday night when they host the Portland Trail Blazers.